Two events one week apart, with similarly spectacular Zero Waste results. “Practically perfect” – how else can you describe total landfill trash that fits in a baggie?

Flirt with Dirt takes place on the trail system at Lakeshore Park in Novi. It’s a “quick and dirty” run, and in some years (like this one) muddy, as it rained for quite a while during the event.

The Liberty Run is part of the weekend-long Canton Liberty Fest at Heritage Park, which includes carnival rides, games, food, and fireworks. 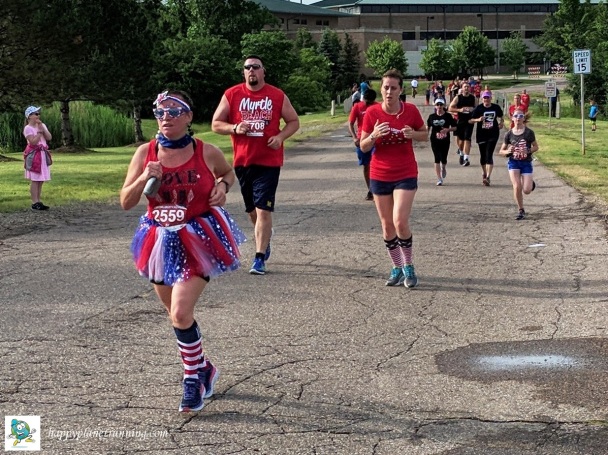 Both races have a straightforward setup and a relatively small area to cover. Both also finish and take down before noon. At Liberty, most runners leave after their race to take advantage of the festival’s pancake breakfast and/or visit the other activities.

We set up the tents for compost, recycling, and wrappers. At past events we’ve put trash bags in the back of the tents for use if needed. At Liberty we experimented with 5-gallon pails for landfill trash, putting them in front of the tents.

Post-race food was similar in both races: bananas, cookies, and snack bags. The compostables were collected for pickup by My Green Michigan on the Tuesday following the Liberty Run.

About as close as you can get to true “Zero Waste” – over 99 percent diversion at both events!

The landfill waste at Flirt was tape and miscellaneous scraps of stuff. At Liberty, the largest contributor to the 1.2 pounds was a used diaper.

Some events this year have suffered from a shortage of volunteers. At Flirt with Dirt, we had an abundance! Every tent was attended, and takedown was quick and efficient. Final sort was minimal, and although it took a couple of carloads, all the recyclables were dropped off at the park’s yard without trouble.

The Liberty Run also had enough volunteers to keep things in order. The main volunteer, Melissa, had never worked a race before, but she learned quickly and helped out from setup to takedown and final sort.

It’s unclear how well the 5-gallon trash pails at Liberty worked, as there was so little actual trash. Some people put compostables and recyclables in them, but that could be quickly fixed.

The aid station waste bags were very clean at both events, with minimal sorting required.

For Flirt, there really were no challenges. We did find one park trash can that had some race waste in it, despite it being just a few yards from a Zero Waste tent. Lesson learned: cover every trash can you don’t want used, even if it’s right next to or behind a tent.

Liberty, on the other hand, had one significant challenge. We’d ordered a 20-yard recycling rolloff from Advanced Disposal. But I was informed the day before that due to driver challenges, it would not be delivered.

Fortunately, we had a Plan B. The park has a recycling program, and they took the cardboard, water bottles, and plastic jugs. The waxed paper cups had to come back with us, as their recycler (GFL) does not accept them. I took them to Western Washtenaw (WWRA) the following Monday.

And at Liberty, despite the extra tent, a number of water bottles were still left on the grass. I confess to being clueless as to why.

For Liberty: If we’re willing to continue taking the cups to WWRA, there’s no need to order a recycling rolloff for this event. Doing so will save several hundred dollars. As an alternative, we can use compostable cups at the aid station and food tent. Then we’d just need to sort out the few coffee cups people bring in.

For both races: Put a 5-gallon pail next to the bin for plastic bags to collect water bottles and other non-bag things people put in the bin.