Zero Waste comes to the Island Lake Triathlon, and despite some challenges, “racks up” another terrific result!

The Island Lake Triathlon takes place at Kent Lake Beach at Island Lake Recreation Area. Athletes begin with a lake swim, then transition to paved path for the bicycle portion, and a combination grass/path run route.

In addition to standard triathlon formats in Olympic and sprint distances, athletes can also elect aquabike (swim/bike) and duathlon (run/bike/run) options. The result is a busy mix of athletes going in several directions that is fun to watch. A live band provides calypso music, and beer and fresh pancakes await finishers. 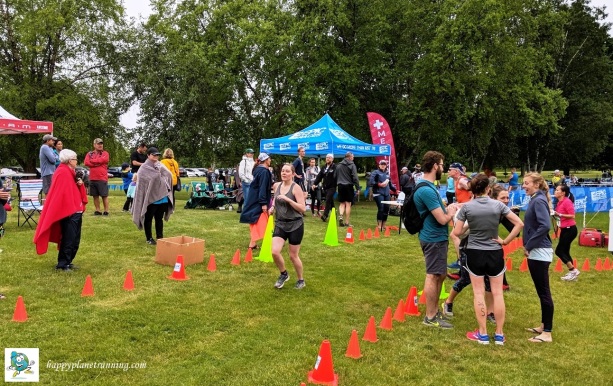 One advantage of having events at Island Lake is their recycling program, which accepts all standard materials and waxed paper cups as well. This meant we did not have to order a recycling rolloff or take our recyclables elsewhere.

Zero Hero tents were set up in the finish area just past the water bottles/medals, and at the far end of the vendor area.

Bins for compost/recycle/wrappers were set up next to the recycling bins at the parking lot on the bike/run route. There is a similar park recycling station about fifty yards away, but due to lack of volunteers and time, I left that one alone. There are trash and recycling can pairs scattered throughout the park, which I also left alone.

The two transition area entrances/exits got bins for recycling, food waste, and wrappers. “Zero Waste Station” signs were put next to them. I judged that tents would take up too much space and not provide much advantage to athletes in a hurry.

A bin was set up to collect the plastic wrapping from medals, water bottle cases, and ice bags.

Post-race food was bananas, cookies, bags of chips, ice cream bars, and pancakes. Compostable plates and forks were used. There was also a beer area that used plastic Solo cups, which are recyclable through the park’s provider (Advanced Disposal).

We left the recyclables next to the parking lot, where the park rangers took them to their recycling dumpster. I took the compostables to Tuthill Farms in South Lyon directly after the event.

The main landfill waste (after second sort – see below) consisted of a broken traffic cone, a couple of bike tubes, several diapers and dog waste bags, and some plastic too contaminated to recycle.

This was the first year implementing Zero Waste at this event. However, as HPR has serviced many triathlons at this park with another client, I had a pretty good general idea of what was needed and where it should go.

As happens sometimes, the event had a shortage of volunteers. Although I had to manage the waste solo during the race, during takedown some volunteers came free and stayed to help sort and weigh, which was a big help.

The initial weight of the landfill bag was over 18 pounds – unusually high for an Epic Races event. I took the bag home and went through it later, and recovered about half of it as additional compostables or recyclables. Quite a bit turned out to be food waste concealed in paper bags, and Gu wrappers I hadn’t had time to sort out during the race.

I had to make some adjustments to the tent and bin locations. During the event someone moved a park trash can into the middle of the vendor area, where it began to fill with mixed unsorted waste. As the tent at the end of the vendor area was not getting much use, I moved it to replace the trash can.

Also, runners leaving the transition area passed by the food tables, and many took bananas. Someone put a cardboard box out to catch the peels, for which we can use a labeled bin next time.

There was quite a bit of miscellaneous small waste left in the transition area – water bottles and caps, wrappers, tag trash, etc. It took some time to properly sweep the area to collect it all, an issue which could be reduced or avoided with cooperation from the athletes.

A coffee truck at the park dumped its used grounds in one of our tents, and some non-compostable materials had to be sorted out. Because the grounds are excellent for compost, I decided to count it in the waste totals even though the coffee truck was not associated with the event.

Due to lack of volunteers, I had to leave the waste stations in the transition area and at the parking lot unsupervised most of the time. This meant extra time sorting at the end due to cross-contamination, with the parking lot station in particular.

Make a specific request of the athletes to police their spot in transition and pick up trash at checkout after the race. Also, transition area volunteers could keep an eye out for trash and collect it during their shifts.

Check with coffee trucks to find out what they intend to do with their waste. Do not assume they will pack it out, even if they are not part of the event.