What’s better than a gala affair with fancy dress and champagne? A gala affair that involves running, of course. And responsible, sustainable waste management for that special extra touch..

The Red Carpet Run is a high-fashion, low-key 5K held on a warm summer night. It took place this year at the Belle Isle Casino, an elegant setting even though everything took place outdoors. Runners dressed in their finest (or not) and ran a circuit of the park, surprising and entertaining the family reunions, at least one wedding reception, and other park-goers there for a relaxing evening and picnic.

After the run champagne was served to the runners in their finisher award of an engraved champagne flute, and awards were presented for best costume as well as for fast times.

Joining in on the fun, and the run, was Zero Waste Team captain Jeff, a.k.a. “Sir Sweat-a-Lot” for the evening.

We set up two tents in the post-race area, which were flattened by a storm squall about an hour before race start. We put them back up, and fortunately the wind died down for the rest of the evening. Next to the beer table we put bins for compost and recycling, as well as in the covered area where people retreated during the rain.

The sorting table was set up in the rear of the finish area in order to reduce its visibility (given this was an “upscale event”) but resulted in longer trips back and forth to where the equipment was unloaded and reloaded.

Post-race food included fruit, cheese and crackers (using toothpicks instead of forks), and beer served in cups. Champagne was also served to runners in their finisher flute. Champagne bottles contributed about 60 lbs. to the recycling total. 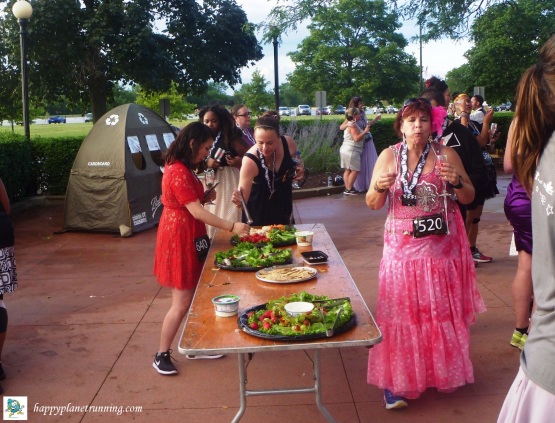 RF Events took the cardboard back to HQ and put it in their cardboard recycle bin. Happy Planet Running took the recycling for dropoff and snack bags/wrappers for TerraCycle, and took the compost to a local commercial composting farm.

A total of 95.6 percent landfill diversion! Breakdown by waste stream:

Last year, with the Zero Waste program being new and not every waste bin clearly marked, a lot of sorting was required. This year the sorting effort was much reduced.

The biggest bummer was having to throw away a large part of the red carpet, which had become thoroughly soaked from the rain. But it had been used carpet to begin with, and it had served the race for many years.

The Carpet America Recovery Effort (CARE) recycles old carpets, but you have to take it to one of their participating centers. Unfortunately the nearest one is nearly 100 miles away from RF Events HQ. Hopefully one will open in the Detroit area!

Put the sorting station closer to where stuff is loaded and unloaded.