The Super 5K is held every year on the morning of Super Bowl Sunday. As it’s usually cold, runners gather inside Novi High School before the race, and then go inside again afterward for awards and post-race food (hot dogs,  meatballs cookies and bananas). The total number of runners, spectators, and staff is usually around 2,000.

After the 8:30 a.m. start it’s quiet in the main area for about half an hour. Then it’s a mob of people eating and hanging around until about 10:30. With so many people eating and then leaving in such a short time, control of the waste streams can quickly be lost, as happened in last year’s DWD Hell race. How were we going to avoid a costly fumble? 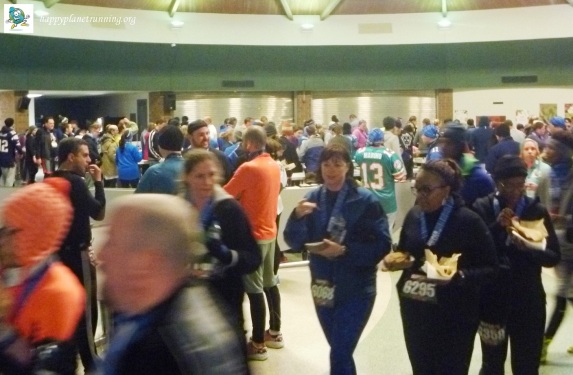 We deployed four Zero Hero Advocates inside the main area to collect the waste. The trash containers from the high school were concealed to ensure we captured as much of the event waste as possible. 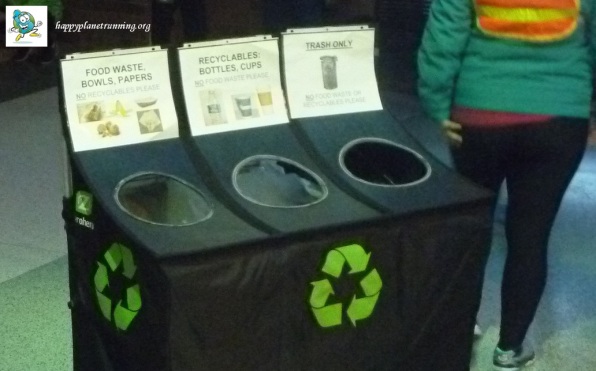 We also set up cardboard bins, with signs for compost/recycle/trash, inside the cafeteria. At first I thought the signage would be sufficient and didn’t staff them. Oops! They turned out to have the heaviest activity and the least attention paid to the signs by the participants. Fortunately, we recovered (see below).

In the main area was a table with water and cups. Initially we set up recycling bins there. But since these began to fill with food waste, we moved a staffed Advocate there.

Recycling consisted mainly of cardboard, water bottles, Absopure cups, and coffee cups, as well as a lot of plastic wrap (collected separately). As the recycle bins at the high school were already full, we took the recyclables to the Recycle Ann Arbor Drop-Off Station the following Tuesday.

My Green Michigan took the compostables. Due to their requirements of accepting only ASTM-certified compostable materials, we purchased biodegradable paper trays to hold the meatballs and papers for the hot dogs. We supplied toothpicks in place of forks.

The high school agreed to take our garbage, as we expected only a small amount.

An excellent event, with over 93% landfill diversion rate and just 16 lbs. total of garbage. And much of the trash was broken glass from dropped finisher pint glasses, which can’t be recycled. Be more careful, people!

Using compostable materials to hold the meatballs and hot dogs made disposal easy – no need to fish out forks or non-compostable bowls from ketchup-laden food waste.

Final sort was minimized due to having enough volunteers to staff every station. They were able to help people toss their waste in the correct bins to start with, and when materials were put in the wrong bin, it was fixed right away.

A couple of extra volunteers at takedown allowed us to weigh the collected bags and cardboard while the Advocates were still staffed. This helped us be done earlier than usual.

Despite signage posted on the Advocates, people still tossed stuff into any bin when someone wasn’t there to guide them. Even with volunteers present there were still people who didn’t look and didn’t listen. More education of the runners would help. Perhaps some more signage at the registration and bib pickup tables. There was a general announcement before race start about our Zero Waste effort, but the background noise in the high school was so loud I don’t think many runners heard it.

Most of the disposal “action” took place inside the cafeteria and just outside it. We had bins in the cafeteria, but I didn’t post anyone there initially. Fortunately one of the staff had time to help out, and we were able to stay of top of the fast-filling bags and keep them sorted. Meanwhile, a couple of Advocates near the main entrance were hardly used, which was a surprise.

For the hot dogs we supplied mustard, ketchup, and relish in small bottles. This left a lot of half-filled bottles that in the past were thrown away. The staff consolidated as much as possible, but the empty ones still needed a bit of rinsing before recycling. The refilled bottles will be given away to anyone who wants them.

Put some waste management information at packet pickup and large sign in the cafeteria – YOUR FOOD TRAYS AND PAPERS ARE COMPOSTABLE – PLEASE PUT IN THE PROPER BINS. THANK YOU.

Post at least one volunteer, and hopefully two, in the cafeteria to deal with the main waste activity.

Go to large jugs of mustard and ketchup instead of multiple small bottles. Less waste, and empties are more easily rinsed for recycling.