The adage was proven again! Heavily market a 5K and you’ll get a decent turnout; whisper “5K and beer” and they’ll beat down the door, especially if the beer is Oberon. This race sold out weeks before the actual event. With a warm evening forecast, and with post-race food including pizza, the beer cans promised to be flying off the tables. Could our intrepid Zero Waste team keep up with the rush? Read on and see!

A straight-up simple evening 5K, with beer before (if desired) and afterward, along with food, games, and live music.

This was the inaugural Oberun, although RF Events has put on the Run Scream Run races in October at the orchard for many years.

Waste from the participants would be mainly inside the “beer garden” so tents were set up at the entrance and exit. Recycle and compost bins were set up by the beer table. At the finish line we set up one tent along the path to the beer garden, and a bin to collect the empty ice bags. We set up the sorting station next to the 20-yard recycling rolloff.

The tents were set up for recycling, composting, and wrappers, with a trash bin hidden in the back of the tent for use if needed. Beer cans were collected them in separate bins next to the tents and by the beer table. We tried to keep them as free of other waste as possible, as they would be donated to a local youth soccer team. 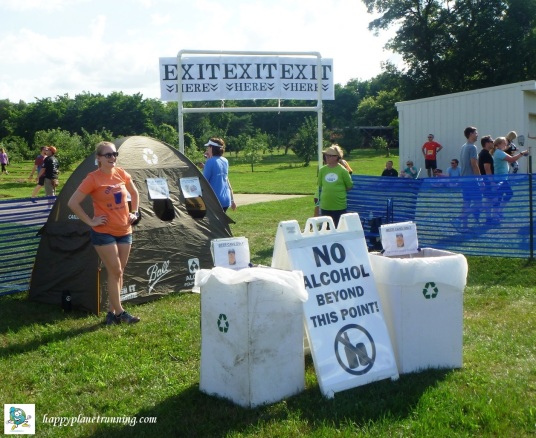 Food at the finish line was just bananas and bags of chips, but three food trucks (Marconi’s Pizza, Shimmy Shack, and Pita Cruiser) would provide more substantial fare inside the beer garden.

To simplify waste collection and eliminate worries about recyclables contaminated with food waste, HPR asked the food truck companies if they could go entirely compostable before the event. All said they already were, or would be for the event.

We had moderate activity before the 6:30 p.m. race start, then got slammed from around 7:00-9:30. The pleasant but warm weather meant people stayed late, ate a lot of food, and drank a lot of beer. But we held it together, and reached a diversion rate of 98.5%!

We posted a volunteer by each tent and set of bins, which kept those areas under control. We also had someone at the sorting station, freeing me (Jeff) to patrol the area and look for issues, haul full bags, check on volunteers, and do emergency on-the-spot cleanups.

Two areas had unexpected rapid pileups of waste, which required regular clearing. The beer table generated a lot of boxboard and cardboard, and the finish line had stacks of cardboard over head high (medal and food boxes). Fortunately, there were enough volunteers available to move it all to the sorting station, where it was quickly weighed and tossed into the recycle rolloff. We ended up filling the 20-yard rolloff.

Note that we did not include the beer cans in the total weight or diversion percentages.

The largest amount of recyclables was 600 lbs. of cardboard! This did not include the pizza boxes, most of which was counted as compost due to the pizza grease.

And the soccer team received $425.00 from the redemption of 4,250 beer cans! A big thanks to Friends of the Border-to-Border Trail for taking the cans and providing additional volunteers.

Thank goodness we had enough volunteers to staff the tents and the sorting station, as Jeff was busy the entire time putting out trash fires (figuratively) and making sure everything was collected, sorted, weighed, and properly disposed of.

The aid station dropped off a lot of bags of cups late, but fortunately they were pretty clean and required only minimal sorting.

It got dark before we entirely finished, but I’d brought along a headlamp which was very handy at the end.

We had one hiccup with a food truck (Marconi’s Pizza). They’d told me they were serving only pizza boxes, with no utensils. During the event, however, we began to discover plastic cups of sauce in the discarded boxes. This meant we had to open every pizza box, including those in bags we’d already tied off. (I did some of this after the event.) We also found a few other non-compostable items in the boxes. Apparently people used the boxes as convenient “catch-alls” for their trash.

More last-minute bags arrived from various areas, and it was dark, making sorting difficult. I took home a few bags to complete the sorting.

If we invite the pizza truck back, perhaps we can ask them to cut down on the boxes – perhaps half a box, or serve slices on paper? Also we need to make sure if they hand out extra sauce it needs to be in compostable cups.