Well, that was a relief.

After the frenetic scramble of Oberun, it was great to recover with a simple, straightforward event where the Zero Waste effort went as planned.

The Pterodactyl is the second of a set of three summer triathlons at Island Lake Park. The others in the series are the Triceratops (June) and the T-Rex (August). All are sprint triathlons – half mile swim, 12.4 mile bike, 5K run – and follow the same course.

We used our standard setup for the triathlon series. The “Ground Zero” sorting station was set up near the registration tent. We set up the tents for compost / recycle / wrappers, with a blue pail by each tent for landfill trash. The park’s waste bins by the parking lot were covered with a tarp.

One tent is set up by the registration tent, and after race start it moves to face people exiting. 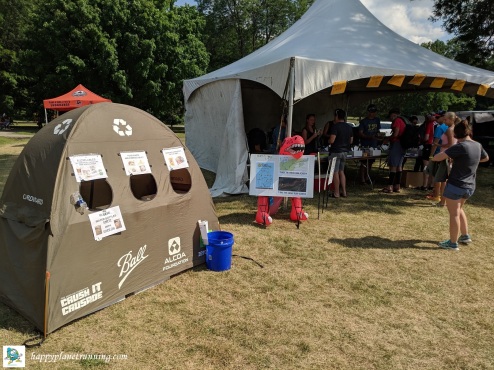 Transition has a set of bins at Bike In/Out and an “All Waste” pail at Run Out.

The finish area has a bag for plastic wrap (mainly ice bags) and we added another for water bottles, because some people finish them before entering the food area.

There were no unpleasant surprises, which was welcome as I had only one other volunteer to assist me. A couple of people stepped in at takedown to help with final sort and weighing the bags.

The extra bag for water bottles in the finish area helped reduce the number found in the bag of plastic wrap. There were still a few in there (some people don’t look at our signs).

The transition area gets littered with small plastic film tabs from the timing tags, which requires a lot of picking up during the event.

The race volunteers were offered pasta served in non-compostable cups. They were also not recyclable due to the oily residue.

More education for the triathletes not to just toss their timing tag waste on the ground.

Have compostable materials available for volunteer use.