A 5K on a beautiful summer evening in an orchard, with food, games, and beer afterward. What could go wrong? For the runners, nothing. For the Zero Waste team behind the scenes? Plenty! Read on for how things could have ended in disaster, and how we recovered. 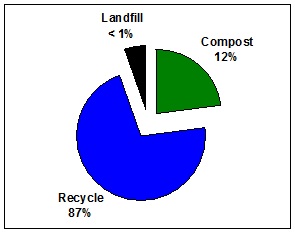 What do you get when you combine a 5K with plenty of Bell’s beer? The Oberun race! Runners get a can of Oberon or Two-Hearted Ale included with their registration, and can buy more before or after the race. Proceeds from the race, and from additional beer sales, went to support Karen’s Trail, an organization dedicated to building bike trails in the Chelsea, MI region.

This was the second year for this event, and just like last year, it sold out quickly. It does so well a second Oberun will be held this year in Indianapolis.

The Michigan event is held at Wiard’s Orchards in Ypsilanti, the same location as the Run Scream Run race in October. The orchard has a series of dirt roads and trails that make for an easy and picturesque course, and a large field that is fenced off to create a “beer garden” for post-race festivities.

The registration area got bins for compost and recycling. The finish area got a bin for plastic bags/wrap, and later also got one for water bottles, as people were tossing them into the bin of bags.

These stations required active monitoring to stay reasonably sorted. We had enough team members to staff the exits, but the beer table tent suffered at times from overflow. I (Jeff) and another team member rotated among all the stations to help with sorting and haul full bags to Ground Zero.

The beer table and finish line generated a lot of cardboard very fast. The volunteer teams there had no time to flatten or stack it at first, but in the end it all got into the truck without trouble. Due to a lack of time, I had to estimate the finish line cardboard rather than weigh it. 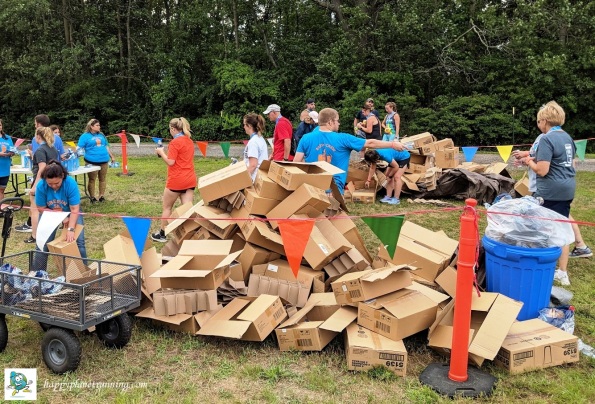 One couple took away over 3,000 empty beer cans for a Boy Scout project, which reduced the amount of material to dispose of, and provided additional volunteer support during the busiest part of the event.

Despite all the challenges (see below) the race area was clean and tidy by 10 p.m. and all the waste had been loaded into the U-Haul truck or event trucks. And although it took significant extra effort post-event, the landfill trash was cut in half from last year’s 14 pounds!

We faced three significant challenges in this short event.

First, few things can go “more wrong” than not having the expected recycling rolloff container show up. Which, a few hours before race start, it hadn’t.

A call to the recycling service provider revealed that the rolloff order hadn’t been fully processed, and thus hadn’t been entered into their schedule. (I’d received the signed paperwork and assumed it was sufficient.) Further, it was too late for them to deliver one.

So we instituted the contingency plan, renting a 17-foot U-Haul truck, which provided the cubic space we’d ordered in the rolloff (about 30 yards). I drove the truck to the orchard and parked it where the rolloff would have gone. The collected recyclables then went into the truck. (See below for what we did with them later.)

The second challenge was with the food trucks. I’d contacted two before the event and been informed they would hand out only compostable materials. The third had been at our events before, so I simply sent an email reminder.

The Pit Master BBQ truck fully complied, using compostable boxes and utensils (thank you!). But the Shimmy Shack crew hadn’t been told of our requirements, so they were going to use plastic forks, which we prevented by purchasing some compostable forks from Pit Master. They did hand out foil sheets, which due to food residue were not recyclable until rinsed.

The Simply Spanish truck gave out waxed paper deli sheets and plastic sauce cups. To purge them from our compostables required a dedicated Zero Waste team member, which increased the workload of the rest of the team. After the event I made a second pass through the bags and removed more non-compostable materials.

Our final challenge, as with 2017, was time. As it was a beautiful evening, a lot of people stayed until it began to get dark, which meant we had to keep the Zero Waste stations operating. By the time the last sets of bags came in it was too late and too dark to sort them.

The following day I took the cardboard and other standard recyclables to a local recycling center. The bags containing waxed paper cups were taken to a different processor farther away (Western Washtenaw Recycling Authority).

I also sorted all the bags we hadn’t had time for during the event, rinsed the foil sheets, and washed the oily sauce cups (over one hundred) so they could be recycled. Small plastic parts, loose bottle caps, cable ties, and other miscellaneous party-type materials were collected for TerraCycle.

We also collected a lot of discarded race bibs and their bottom ribbons, which had been used as beer tags. As they are made of Tyvek, they will be sent to DuPont for recycling.

My Green Michigan took the collected compost the following Tuesday, after I’d made a second pass through every bag to make sure they were free of waxed paper and plastic.

It appears that additional followup on rolloff orders will be needed to ensure that the orders are fully completed and delivery is actually in their schedule.

More detailed communication with food trucks, so everyone is on the same page regarding what materials we’d prefer and which interfere with our Zero Waste effort.

Bring some compostable plates, utensils, cups, and deli sheets to any event that uses food trucks, so we can supply them if needed.

At the finish line, hide the plastic bag/wrap bin from the runners (it’s for race staff only) and put a visible bin for bottles there.

The “proof of age” wrist bands generate a lot of small waste from their sticky tab covers, which can litter the ground. Perhaps we can locate an alternative type of band.