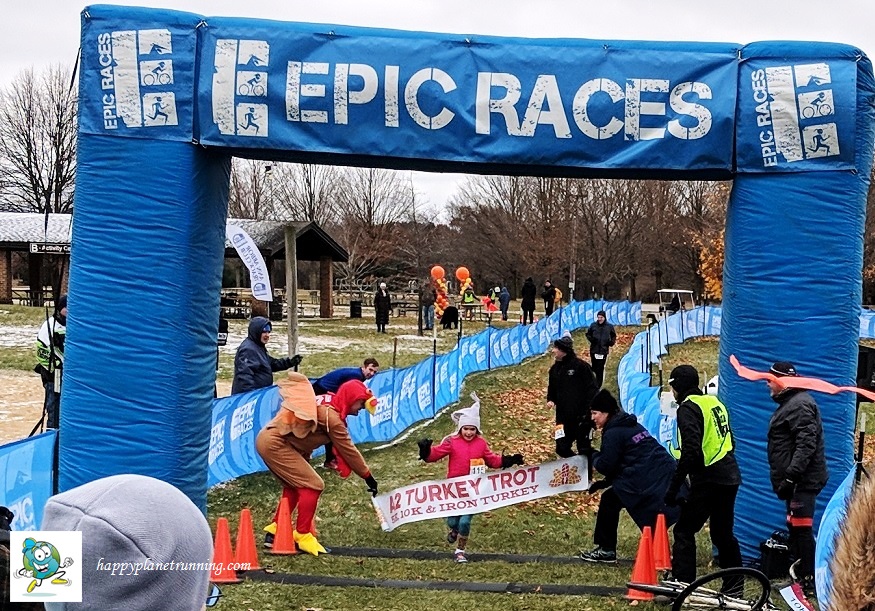 The metropark was covered in snow from the night before, but the Turkey Trot went on as scheduled, and some folks were brave enough to earn an “Iron Turkey” by running both the 5K and 10K. But there was hot food and a wood-burning stove waiting to warm up the runners, and the Zero Waste team was there to make sure the day wasn’t spoiled with a lot of trash. See how we did below!

Comparison vs. 2017:  Total waste increased from 122 pounds to 161 pounds, due mainly to capturing over 40 pounds of donated food that we didn’t measure last year. Other recyclables decreased, and compostables increased slightly. Diversion percentage decreased slightly from 99 percent to 97.5 percent due mainly to use of waxed paper boats (see below).

Hudson Mills is a pretty metropark just northwest of equally picturesque downtown Dexter. A paved path runs along its circuit, and while it’s mainly flat, there are a few gradual climbs that can suck the breath out of those pushing too hard. And on a windy, frigid day, it made for a challenging run.

Runners had the option of a 5K or 10K, with an “Iron Turkey” option for those brave enough to run both. This year for the first time a one-mile fun run was also included. 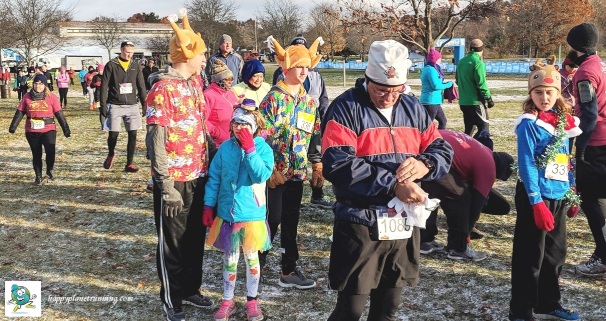 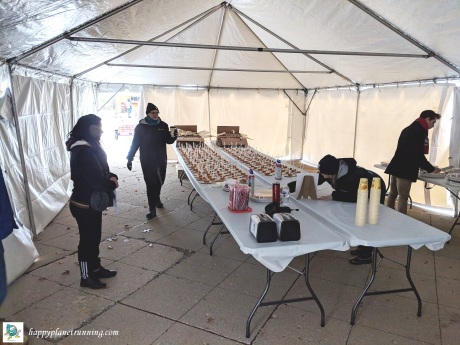 Due to the weather we skipped the Zero Hero tents. Sets of cardboard bins were placed between the food tent and park building, near the hot dog stand and coffee truck, and at the building’s exit to the parking lot (moved to the parking lot when we saw a park trash can there getting more use than our bins). The finish line got a bag for plastic bags and wrap from the medals. 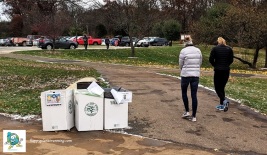 Inside the park building, which had registration, awards, and vendors, we set up an Advocate (mini-station). The second Advocate I brought had snapped a key rivet and couldn’t be used, so we put out a set of bins instead.

We moved or covered the trash bins inside the building, and those outside near the building.

We checked with Ray’s before the event to confirm they would use compostable materials (plain paper hot dog wrappers). We also collected their small plastics and disposable gloves. Bearclaw packed out their coffee preparation waste.

The pie serving plates and forks were compostable. Cups and water bottles were recyclable. Snack bags of potato chips and Twizzler sticks were also served, with their wrappers to be treated as trash unless we had time to separate them.

The collected recyclables go to the recycling dropoff at nearby Dexter Township Hall, and compostables to Tuthill Farms. 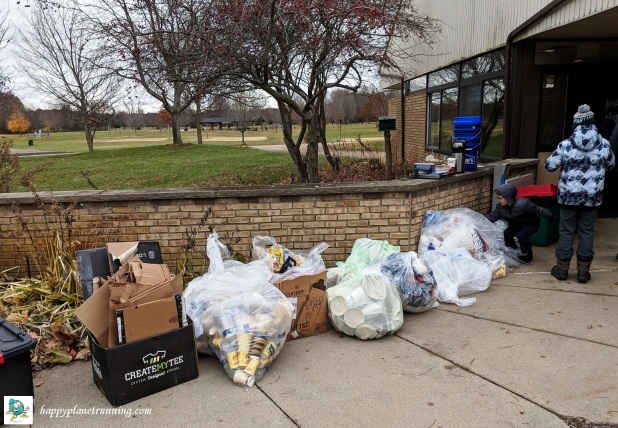 The empty pie containers (foil tins inside plastic top and bottom covers) were smeared with food waste. HPR rinsed them after the race and then recycled them. Whipped cream cans were emptied fully and then recycled.

We had enough time to save most of the chip bag wrappers, and some energy bar and Gu wrappers as well.

Two cheerful and hardworking volunteers helped make collection and sorting go smoothly. One of the staff helped in the tent by stacking the empty pie containers.

And for his efforts at several events this year, including on-the-spot volunteering, Scott (pictured here) received the Zero Waste Volunteer of the Year award. The award is new this year, but hopefully will become a tradition.

The pie was so popular we ran out of compostable plates and had to switch to leftover waxed paper boats that, unfortunately, we had to landfill. This is the main reason the diversion percentage, while excellent, did not match 2017.

The Bearclaw truck also ran low on compostable cups and switched to standard waxed hot cups, requiring a bit more sorting effort from us. They promised this was the last of their stock and would soon be 100 percent compostable all the time.

We set a pile of cardboard by the back door of the building. Apparently someone on the park staff took it for recycling before we could weigh it, so that portion is estimated.

The park building has a kitchen, so we could rinse the pie containers and empty the whipped cream cans onsite given time and an available volunteer.

Weigh the cardboard early, in case the park staff takes it (which is not a problem).