It was Hustle time in downtown Dexter, with a beautiful sunny afternoon highlighting the colorful decorations and the costumes of runners. But it was cold, which was a challenge for those working the race instead of running it.

Challenges for the Zero Waste team include setting up in the cold, takedown in the dark and cold, and waste that piles up quickly from the stations and the food and registration tents, Still, in 2017 we ended up with just five pounds of landfill. How did we do this year? See below! 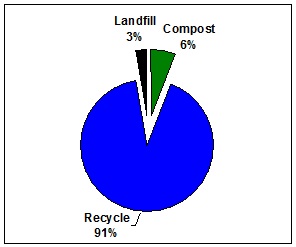 Main contributors to landfill trash were bags of dog poop, disposable hand warmers, and some non-recyclable materials brought in by runners, such as McDonald’s packaging.

Comparison vs. 2017: Nearly the same in proportion and quantity. The biggest change was total recyclables, which had a net increase of about 20 pounds due to increased cardboard weight. Landfill decreased slightly from 5.1 pounds.

The main event is a 5K running through downtown Dexter and a nearby neighborhood. Lots of runners dress in holiday themed costumes. 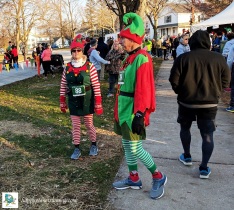 The 5K starts at 4:30 p.m. so it gets dark soon afterward. This year there was a parade down the main street starting at 6 p.m. so there was extra incentive to wrap things up quickly. For kids, there’s a one-mile race before the 5K, and hot chocolate and cookies afterward, and Santa puts in an appearance at the pavilion.

Post-race food was cookies and small Hershey’s candies. Water bottles were handed out at the finish line. Coffee and hot chocolate were set up in the volunteer tent for staff and volunteers.

Ground Zero was set up near the road, opposite the registration tent. This location provided visibility to the Zero Waste stations without interfering with runner traffic.

Due to the cold, we used bins for compost/recycle/trash instead of tents. Stations were placed near Ground Zero, near the food table, and next to the statue, with two bins for water bottles placed past the finish line. This year we lighted the bins: green for compost, blue for recycling, and red for landfill, with the “Zero Waste Station” signs lit with reading lamps. 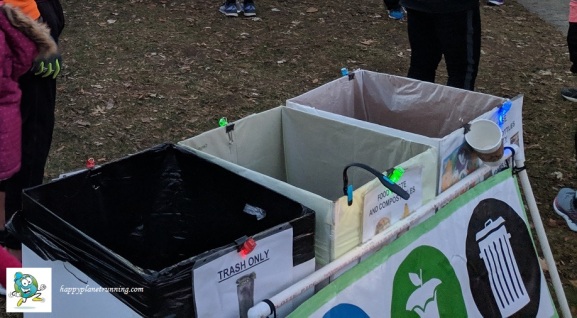 The registration tent and finish line also got bins for plastic wrap. Park trash bins were covered with contractor bags.

We expected low total waste, so HPR rented a 4×8 U-Haul trailer instead of reserving a rolloff. Compostables would go to WeCare in Ann Arbor, and recyclables to Western Washtenaw Recycling and Recycle Ann Arbor. It gets dark soon after the 5K, so final sort was done the following day.

As at Turkey Trot, using plain bins instead of tents saved a lot of fumbling in the cold and seemed to work just fine, as the low amount of waste meant no bins got full. And there were no KIND bars this year, so we avoided all those paperboard boxes.

I had two experienced volunteers to help out, and they were terrific as usual. For her help at many events this year, Alicia (pictured here) received an award for RF Events Zero Waste Volunteer of the Year! 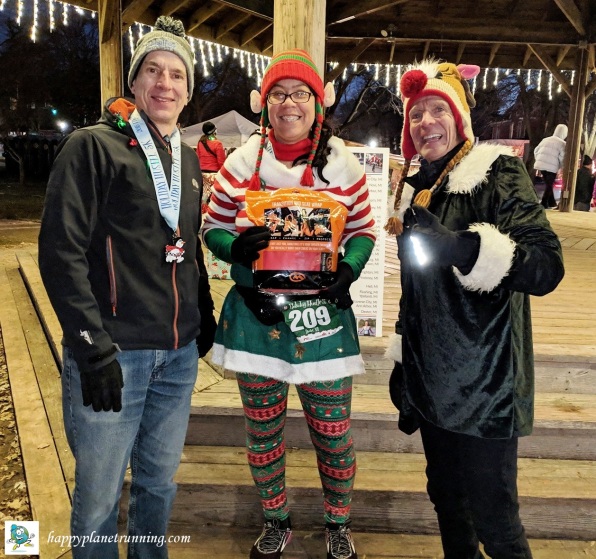 Relatively few water bottles were full or partly full. However, they required extra time to recycle, as they froze and had to be thawed and emptied.

Despite the lights and pre-race announcements, many runners did not pay attention to the different bins. So the Zero Waste team rotated among the stations to keep them as sorted as possible. Also, some trash was piled on top of the covered park trash bins instead of at a waste station.

For some reason, at this event a higher than average amount of trash is left on tables or dropped on the ground rather than disposed of. The team did a sweep of the park at takedown to pick up loose items.

Move the park trash bins, or integrate them into the waste stations.

Putting Zero Waste Station signs up high might reduce the waste left in the park. Look into using umbrella bases so stakes don’t have to be driven into frozen ground.