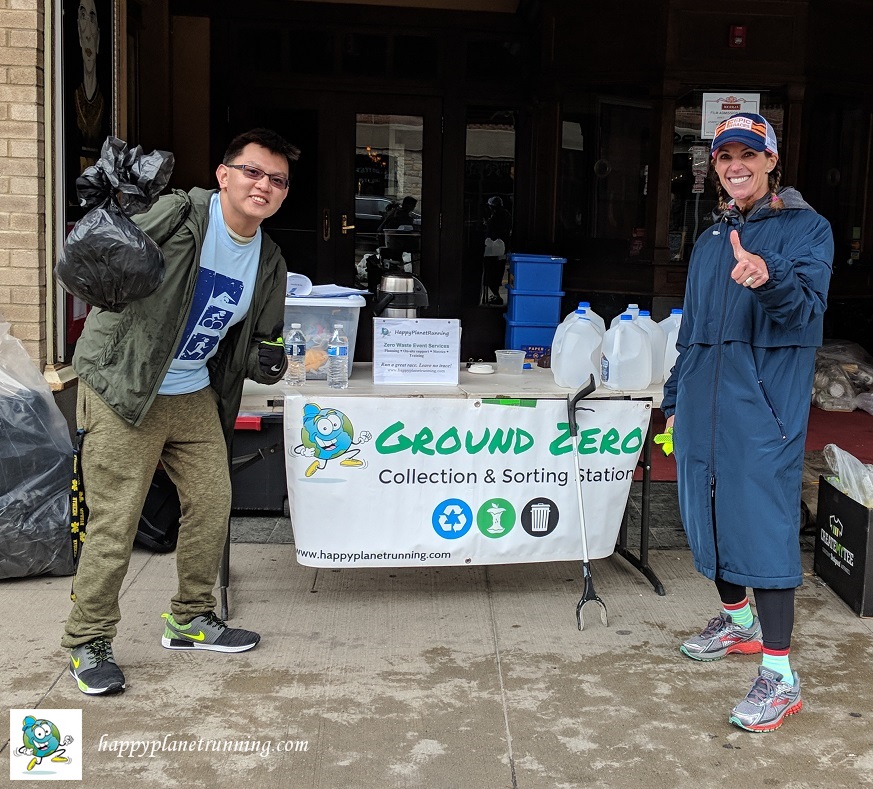 What more appropriate day than Mother’s Day to celebrate Mother Earth by having a 5K that was about as close to true zero waste as you can get? Read on to see how we did it!

The Ann Arbor Goddess is a Mother’s Day 5K that both celebrates motherhood and raises awareness of ovarian cancer and funds to fight it. It is not uncommon to see three generations of female family members take part. There is also a one-mile dash for small children.

Light refreshments are served afterward, including yogurt parfaits and an orange juice and beer combination known as, “MOMmosas.”

With just one race, everything is taken down and the streets reopened before noon, which makes staying on top of the waste important.

We set up three Zero Hero tents: one by the Michigan Theater near the start line, one near the food tables past the finish line, and one at the corner of Liberty and Thompson, which had been a “hot spot” for waste during the Firecracker 5K last year. The medals area got a cardboard bin for plastic wrap. The MOMmosa area got extra bins for cups and recyclables.

We covered the City trash and recycling bins with contractor bags. To my pleasant surprise, there were no known attempts to use them anyway.

Clear compostable cups were used for the MOMmosas. We captured all of them because the runners could not leave the enclosed beer area with them.

Cardboard and standard recyclables were put into a recycling dumpster provided by the City of Ann Arbor. As the aid station used wax-coated cups that the City does not accept, we took those, along with many coffee cups, to Western Washtenaw Recycling. Compostables were taken to Epic HQ and picked up by Zero Waste Washtenaw after the event.

Over 99 percent diversion, with just over one pound of trash for an event with over 1,000 runners, plus spectators.

The number and location of the tents and bins turned out well, with one exception – the tent at Liberty and Thompson was not used much, as it was blocked by  the beer area. So the tent was moved to the beer area entrance/exit.

The entrance area of the Michigan Theater was a good place to put the Ground Zero station. It was centrally located and had lots of space for equipment and temporary storage of waste bags.

I was able to keep the tent by the Michigan Theater under control, and we had a dedicated volunteer for each of the two other tents. As a result, the bags from those tents did not required much final sorting.

We had an unexpected vendor show up who gave away cups of another brand of yogurt. The problem was that those cups, while recyclable, had to be rinsed clean due to the residue. I had to do this after the event, as there was no time during the event. To help minimize contaminating the other recyclables, we put out 5-gallon pails for the used yogurt cups.

I had assumed the food table at Liberty and State would use the tent nearby. But sometime during the race, the Starbucks at the corner put out two recycling carts. By the time I saw them, they were already filled with race waste, including a lot of food waste and other compostables.

Eva, the race director, provided some volunteers and we got them emptied and rinsed during takedown and cleanup.

If the yogurt folks want to be part of the event next year, they should provide a volunteer to rinse the cups.

Let Starbucks know not to put their carts out during the race. Also put more waste bins by the food table for them to use.

Have a bucket to rinse our large yogurt tubs onsite.