Dear St. Patrick: Great job with the snakes and all. Anything you can do about snow?

The Shamrocks & Shenanigans 5K took place on a day where, unofficially at least, spring took over. But that was in the afternoon. Race morning was a final blast of winter fury – cold, windy, and snowing. Still, the show went on, and lots of brave, green-wearing souls showed up to run, so the Zero Waste team was there too. Gotta job ta do, laddies!

The Zero Waste station was set up in the parking lot near the finish line. With a pretty fierce wind, I did not set up a pavilion, and my tall sign blew over, so the setup was very minimal. No problem, as the runners easily found us when they had something to toss. We also patrolled the 5K starting line on Main Street. Several runners were holding coffee cups, but made no attempt to give them to us. I think this is the first race where I saw people starting still holding their coffee!

Total waste was way down from 2019, the last time this event was held – 38 lbs. total vs. over 100 the other three years measured. Several things contributed: slightly lower attendance, pint glasses and T-shirts being optional instead of included, and the weather conditions, causing many to leave quickly or head inside to Conor O’Neills. Landfill waste was minimal – just some tape and a few ice cream lids. Like previous years, we gave out ice cream (!) to the kids after their 1K run. Most chose, however, to take it back home rather than eat it there.

By afternoon the sun was out and the snow was gone, leading to several warmer days ahead. Nature will have her little joke.

One Piece at a Time

(Note: This is also posted on my personal blog, RunCoffeeWrite, because, well, because I have the power.)

Went out for a club run yesterday morning, and I had garbage on my mind.

Perhaps I should say, “litter” instead because, after all, I’m the Zero Waste guy, who reduces, reuses, and recycles (and composts) as much as possible before anything goes into my landfill bin. And I’d just completed five proposals for serving events in the area. So I was well prepped for what happened on said morning run.

Our route took us through one of the local parks along the Huron River. As I entered the park again on my way back, I saw a piece of litter on the path and stopped to pick it up. Then I saw another, and a third. I’d intended only to pick up those few items, but then in one of those “God will provide” moments, I spied a plastic bag caught in a bush.

And so the rest of my run turned into a plog. With no target pace or other training goals to worry about, I made it a game; I’d pick up any piece of litter on the path or sidewalk within a few feet of me, and at the end count how many I had.

It was just over two and a half miles back to the studio, through the park and into downtown Ann Arbor, and during that stretch I picked up…how many items? Have a guess! Here’s a photo to help you. Feel free to do a quick count if you like. Go ahead, I’ll wait.

Despite a chilly rain, the downtown Ann Arbor Turkey Trot 5K and kids run took place on schedule, with a good crowd on hand. And despite the conditions, the Zero Waste Team had its best Turkey Trot to date, with less than one pound of landfill!

END_OF_DOCUMENT_TOKEN_TO_BE_REPLACED

Well, it’s been a long time since I’ve had an event to work. But Happy Planet Running is still here! And when racing resumes, so will my work to keep events as Zero Waste as possible.

The last event I helped with, the Super 5K in February, seems like it happened years ago. Now it’s a different world, and who really knows what lies ahead post-pandemic.

One casualty has been recycling. While curbside collections have continued in my area, the dropoff centers were closed for a while, and are just now starting to reopen to the public. Some items, like Styrofoam, need to be taken there, so it was piling up in my garage until recently.

We’ve seen another reversal away from reusables to disposables, with the banning of reusable bags at many stores. Some are using paper, but big stores like Meijer offer only plastic bags. And coffee shops are dispensing into disposable cups only. Fortunately I have ways to recycle or compost these items, but in general it means more trash going to landfill, or ending up by the side of the road. Hopefully we can return to reusables in the future.

Good news on the compost side, however – the two commercial composting facilities in my area remained open, with some adjustments and restrictions, so when events restart we’ll be able to process food waste and other organics as usual.

And the Ann Arbor Materials Recovery Facility (MRF), three years after its shutdown, is  going to be updated and reopened! This is terrific news. Currently, the recyclables collected by Recycle Ann Arbor are trucked to Cincinnati for processing. Having this done at our local MRF means a lower carbon footprint and they can charge for processing materials instead of paying someone else to.

I’m also working on some new guidelines for hosting a Zero Waste event, and developing a way to recognize smaller events who can’t afford formal certification for their hard work.

So while there may not be any events at present, things are happening! Stay tuned to this website for updates. 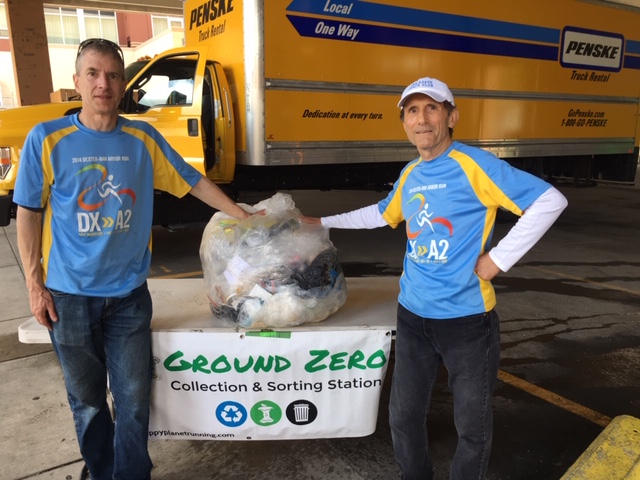 The Dexter-Ann Arbor Run, a half-marathon put on by the Ann Arbor Track Club (AATC), has been held annually since 1974 and draws thousands of runners each year. As with any event that size, it generates a lot of waste.

In 2018 AATC approved a Zero Waste initiative for the race, and landfill waste was cut from several thousand pounds to just 28, and just 23 pounds in 2019. Happy Planet Running was proud to be a part of this effort. In its newsletter, the “Rundown” the club recently recognized and applauded the program. See the excerpt below. Great stuff!

END_OF_DOCUMENT_TOKEN_TO_BE_REPLACED

Over 4,000 runners and less than two pounds of landfill. Now there’s something to be grateful for!

RF Events continued its tradition of a Thanksgiving Day 5K in downtown Ann Arbor, and turkeys, giant fruit, and Christmas characters (even a Grinch) were there to run the 5K. (And some regular runners showed up, too.) We fed them bananas, cookies, and hot chocolate. Did we do all that with minimal waste? You bet your wattle. See below!

END_OF_DOCUMENT_TOKEN_TO_BE_REPLACED 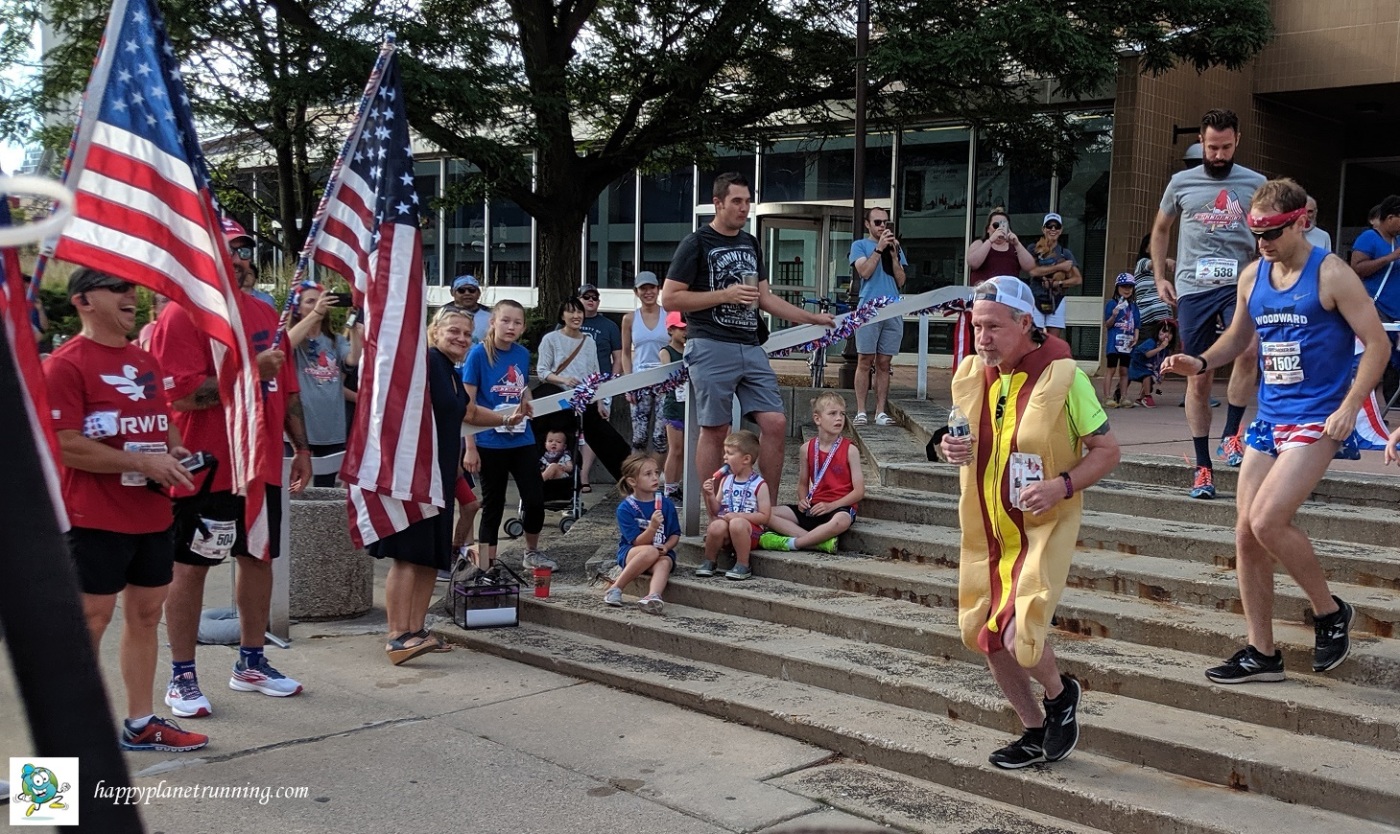 “How are things going, Jeff?” someone asked me during this year’s Firecracker 5K.

I was only half joking. I’ve worked too many events that seem to be going well, only to be hit with some hidden unpleasant surprise (for instance, volunteers filling up the Starbucks recycling bins with food waste). But all went smoothly, even though we had to clear out quickly for the 4th of July downtown parade. Read on for how we dealt with it!

END_OF_DOCUMENT_TOKEN_TO_BE_REPLACED 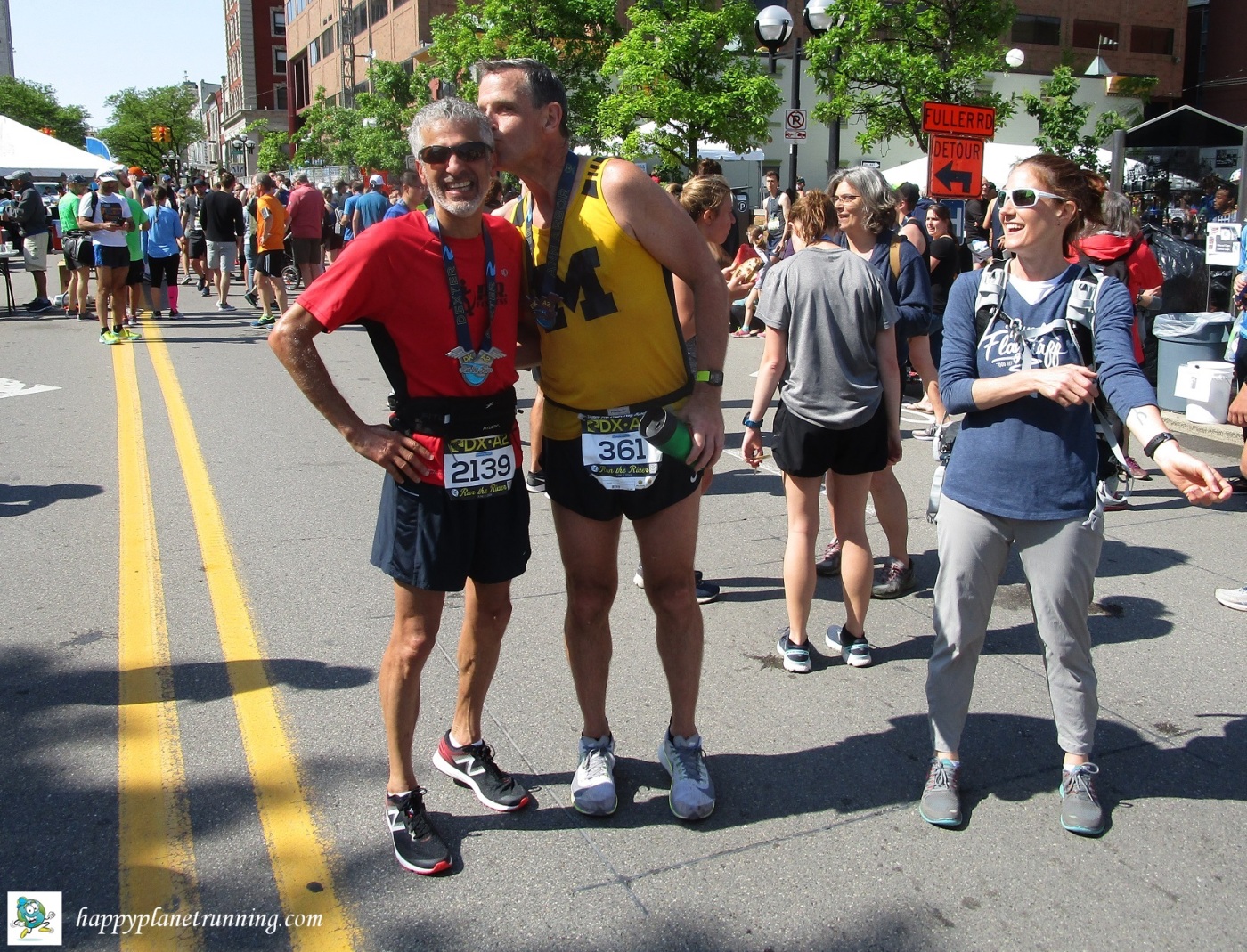 It was a beautiful morning, and runners were out in force for the annual 13.1-mile jaunt along the Huron River from Dexter to Ann Arbor. This was great news for the Ann Arbor Track Club and local businesses.

But could the Zero Waste team stay of top of the festivities and repeat last year’s 98 percent landfill diversion? Not without a few bumps in the road – like almost having nowhere to put a thousand pounds of banana peels and pizza boxes. How did we manage it? Find out below?

END_OF_DOCUMENT_TOKEN_TO_BE_REPLACED

It was a cold, wet morning in Ann Arbor, but over a thousand brave souls turned up to run a 5K (and drink beer), and some equally brave kids ran a 1K (and ate ice cream). The Zero Waste team had to do its best to stay reasonably dry and warm while making sure the boxes, bottles, cups, and food waste ended up where they belonged.

Did we keep the race “green” in keeping with St. Paddy’s Day tradition? Sure’n we did! Read on for details, ladies and laddies!

Shamrocks & Shenanigans is a St. Patrick’s Day-themed race in downtown Ann Arbor. The main event is a 5K, and a 1K kids race is also offered. The event ends in the parking lot of an Irish pub, with a beer garden set up for the thirsty finishers. For the younger set, there was orange juice and ice cream.

Sources of race waste include finish line water bottles and food, cardboard from the boxes of medals and pint glasses, and plastic wrappings from the finisher medals. Beer garden waste is managed by the pub.

Due to windy and wet conditions, we used rubber “Slim Jim” bins instead of Zero Hero tents. We set up three stations in the parking lot; at the end of the food table, at the Ground Zero pavilion (in the parking lot near the finish line), and near the vendor tents. The food table received a pail for disposable gloves and other waste that could not recycled or composted. Plastic wrap from the medals was collected prior to race start. 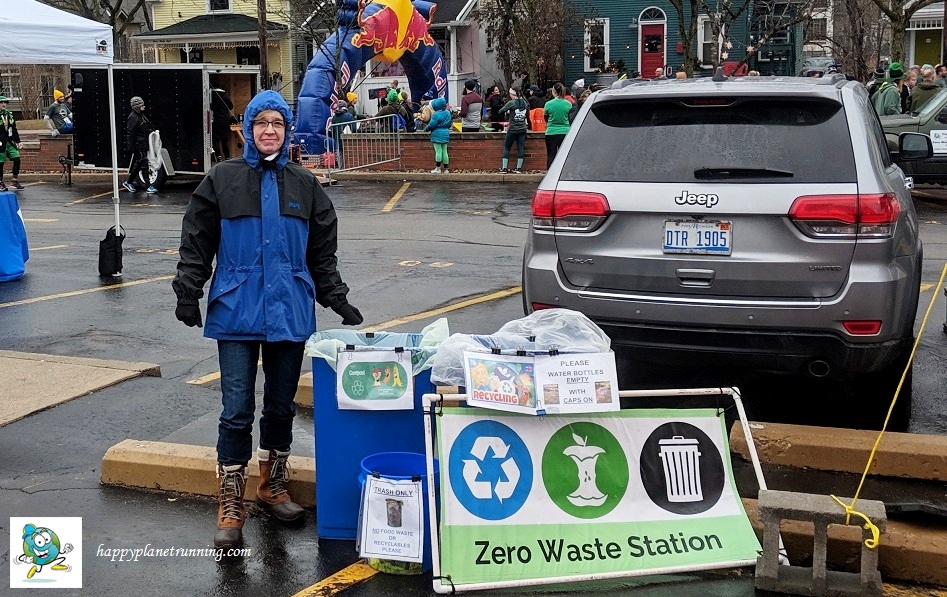 Post-race food was minimal – bananas, bagels, and ice cream cups (which, rather surprisingly, got used up).

We did not set up stations or cover City trash bins in the starting area at Main and Liberty, as not much waste is generated by the runners there. Instead, two Zero Waste team members swept the starting line area, picking up waste found in the street and sidewalks. (Most of what we collected was likely not from the runners, but it was recoverable.)

We received a six-yard recycle dumpster and two 96-gallon compost carts from the City. We covered the carts to avoid having them treated as general trash cans.

About 50 Styrofoam ice cream cups were recovered. Jeff rinsed them and took them to Recycle Ann Arbor. The accompanying plastic spoons were put in a TerraCycle box.

Using the Slim Jims avoided the trouble of wet tents and keeping them anchored. And setting up a pavilion at Ground Zero proved valuable in helping keep the team drier, if not warmer. 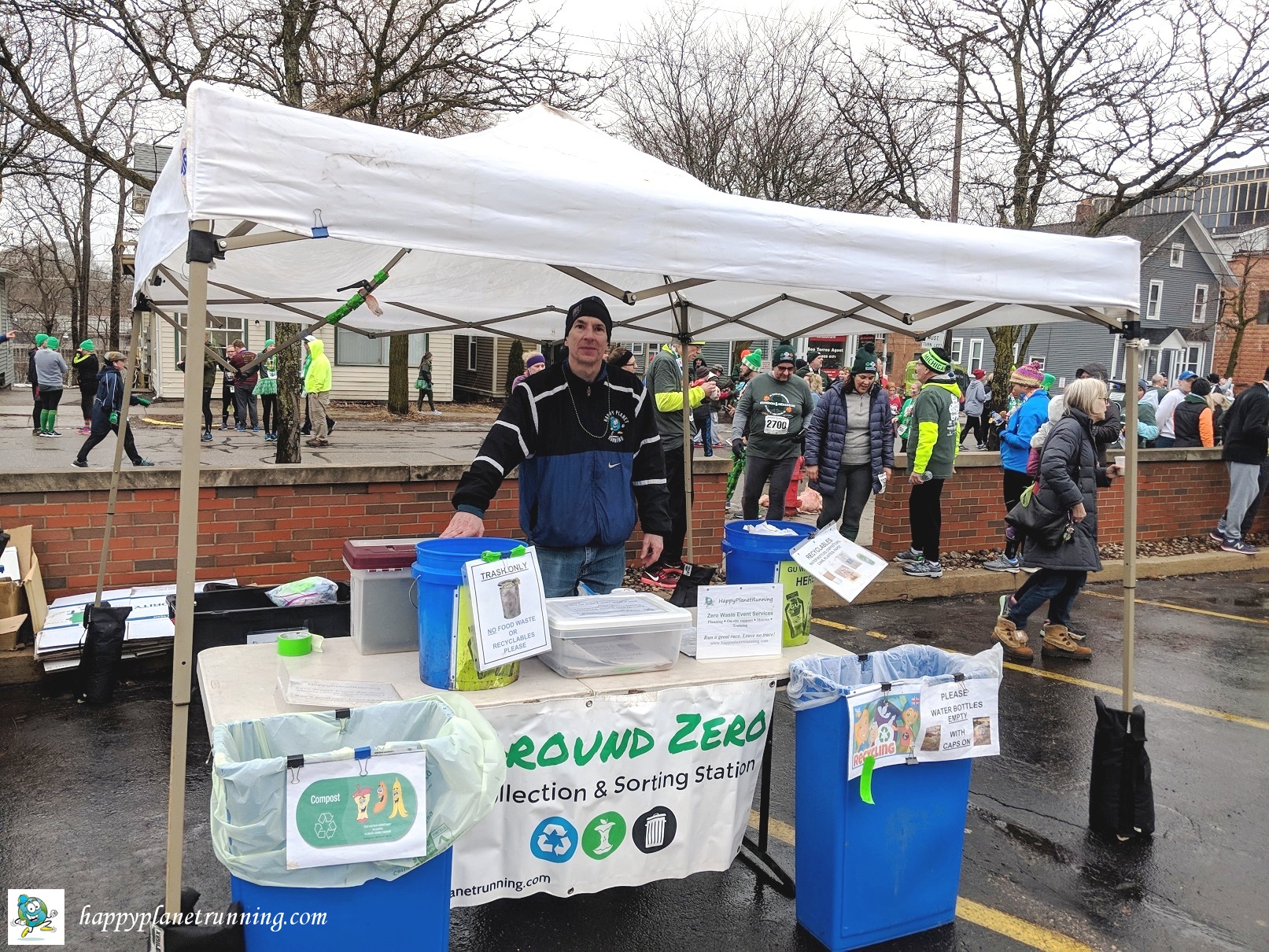 The Zero Waste team volunteers were terrific, gamely staffing the stations in the poor weather and making takedown smooth and fast. Thanks, all!

This year pint glasses were an option item purchased separately ahead of time, rather than all runners receiving them as a finisher award. This cut down the waste cardboard significantly. 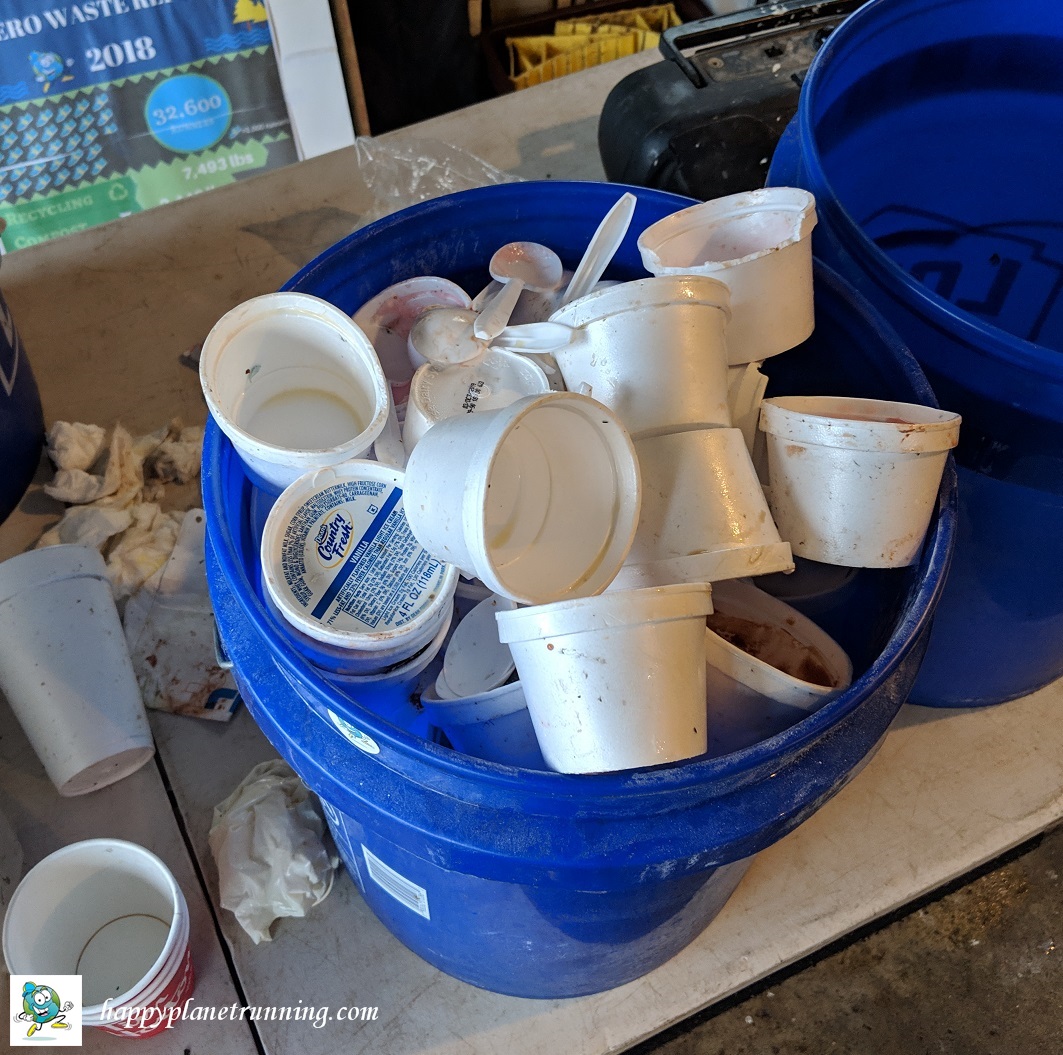 The sticky ice cream cups were a nuisance, but we minimized the problem by having people put them and the spoons in the blue pails rather than the recycle bins. At race end all pails were put into a single bag for final sorting later.

A more environmentally friendly solution for the ice cream would be nice, as well as using compostable spoons rather than plastic.

The six-yard recycling dumpster was more than enough for our needs. Also, we only had a single bag of compostables. We can make adjustments next year, and possibly put everything in just a couple of recycling carts and a single compost cart.