It was a cold, wet morning in Ann Arbor, but over a thousand brave souls turned up to run a 5K (and drink beer), and some equally brave kids ran a 1K (and ate ice cream). The Zero Waste team had to do its best to stay reasonably dry and warm while making sure the boxes, bottles, cups, and food waste ended up where they belonged.

Did we keep the race “green” in keeping with St. Paddy’s Day tradition? Sure’n we did! Read on for details, ladies and laddies!

Shamrocks & Shenanigans is a St. Patrick’s Day-themed race in downtown Ann Arbor. The main event is a 5K, and a 1K kids race is also offered. The event ends in the parking lot of an Irish pub, with a beer garden set up for the thirsty finishers. For the younger set, there was orange juice and ice cream.

Sources of race waste include finish line water bottles and food, cardboard from the boxes of medals and pint glasses, and plastic wrappings from the finisher medals. Beer garden waste is managed by the pub.

Due to windy and wet conditions, we used rubber “Slim Jim” bins instead of Zero Hero tents. We set up three stations in the parking lot; at the end of the food table, at the Ground Zero pavilion (in the parking lot near the finish line), and near the vendor tents. The food table received a pail for disposable gloves and other waste that could not recycled or composted. Plastic wrap from the medals was collected prior to race start. 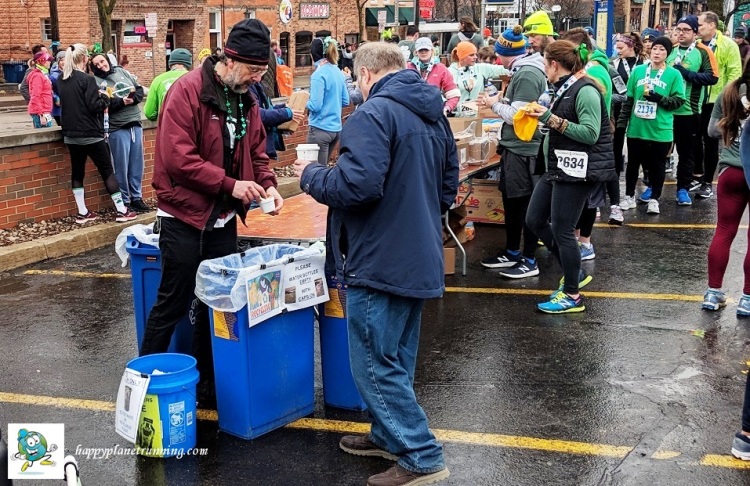 Post-race food was minimal – bananas, bagels, and ice cream cups (which, rather surprisingly, got used up).

We did not set up stations or cover City trash bins in the starting area at Main and Liberty, as not much waste is generated by the runners there. Instead, two Zero Waste team members swept the starting line area, picking up waste found in the street and sidewalks. (Most of what we collected was likely not from the runners, but it was recoverable.)

We received a six-yard recycle dumpster and two 96-gallon compost carts from the City. We covered the carts to avoid having them treated as general trash cans.

About 50 Styrofoam ice cream cups were recovered. Jeff rinsed them and took them to Recycle Ann Arbor. The accompanying plastic spoons were put in a TerraCycle box.

Using the Slim Jims avoided the trouble of wet tents and keeping them anchored. And setting up a pavilion at Ground Zero proved valuable in helping keep the team drier, if not warmer.

The Zero Waste team volunteers were terrific, gamely staffing the stations in the poor weather and making takedown smooth and fast. Thanks, all!

This year pint glasses were an option item purchased separately ahead of time, rather than all runners receiving them as a finisher award. This cut down the waste cardboard significantly.

The sticky ice cream cups were a nuisance, but we minimized the problem by having people put them and the spoons in the blue pails rather than the recycle bins. At race end all pails were put into a single bag for final sorting later.

A more environmentally friendly solution for the ice cream would be nice, as well as using compostable spoons rather than plastic.

The six-yard recycling dumpster was more than enough for our needs. Also, we only had a single bag of compostables. We can make adjustments next year, and possibly put everything in just a couple of recycling carts and a single compost cart.