It was a beautiful morning, and runners were out in force for the annual 13.1-mile jaunt along the Huron River from Dexter to Ann Arbor. This was great news for the Ann Arbor Track Club and local businesses.

But could the Zero Waste team stay of top of the festivities and repeat last year’s 98 percent landfill diversion? Not without a few bumps in the road – like almost having nowhere to put a thousand pounds of banana peels and pizza boxes. How did we manage it? Find out below?

Comparison vs. 2018:  Total waste increased by 15 percent due to higher attendance and better weather, but we were still able to reduce the amount sent to landfill.

The Dexter-Ann Arbor Run has been put on by the Ann Arbor Track Club since the 1970s. The main event is the half marathon that begins in Dexter and follows the Huron River into downtown Ann Arbor, and is notorious for a grueling uphill climb for the final half mile. 5K and 10K options are also offered.

This is the second year Happy Planet Running has assisted with the event’s composting and recycling program. In 2018 landfill diversion was boosted from an estimated 70-75 percent to a confirmed 98 percent, and we recycled the aid station cups for the first time.

The event has two main sources of waste: the finish area, which has water, food, and beer, and ten aid stations with cups of water and Gatorade, and Stinger energy gels.

Like last year, the City of Ann Arbor would provide three recycling dumpsters and fifteen 96-gallon compost carts for food waste and pizza boxes. Then a week before the race, they told us there were no carts to spare. We did some quick brainstorming for an alternate collection method, and fortunately the City agreed to give us trash carts that we could repurpose for compostables. Whew!

Based on last year’s lessons learned, we made the following adjustments and improvements to the plan:

Post-race food included pizza, bananas, bagels, and cookies. We asked the pizza provider not to include plastic tripods or waxed paper liners in their boxes. To save time and effort, pizza boxes were composted regardless of their grease or food residue levels.

Six waste stations (compost, waxed cups, other recycling, trash) were set up by the food tables (three on either side). At the end of the food tables we put compost carts for food waste and pizza boxes. Stations were also set up at the corner of Main and Ann Street (replacing the City bins there), and along Ann Street.

The finish line got a bin for plastic wrap from ice bags and cases of water bottles.And the food tables got bins for food waste and recycling, and a box for used disposable gloves. 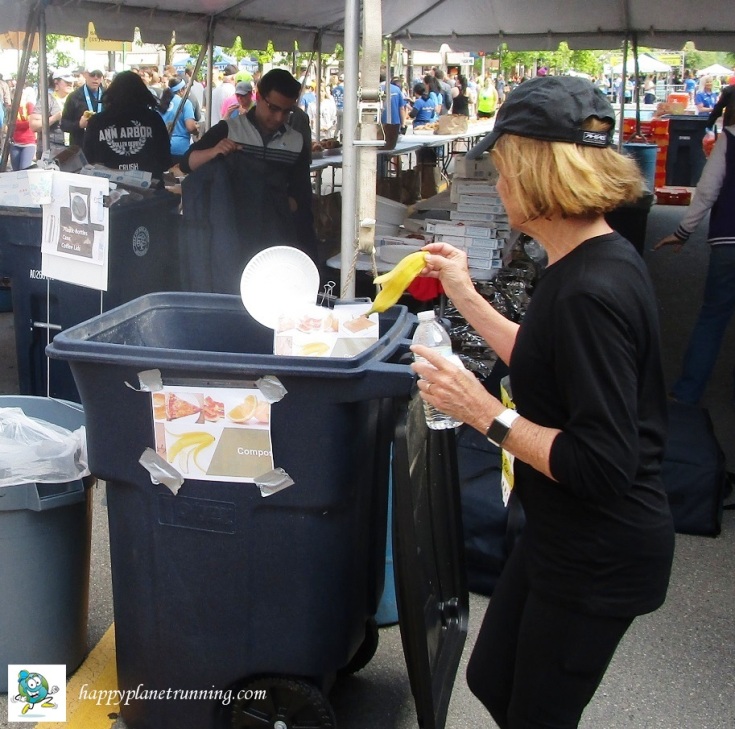 The beer area received three cardboard bins for recycling and one for trash. Once it got busy, however, they rapidly filled with mixed waste. We sorted the bins, added a compost cart, and asked someone to monitor them. Bag quality was then much improved.

Due to a shortage of volunteers (see Challenges below) we could not staff the waste stations full time. So we rotated among them, sorting real-time and assisting runners during the rush periods. We also visited the food prep area regularly to keep their bins sorted and to answer their questions.

We set up “Ground Zero,” the main sorting station, in the parking lot on the south side of Ann Street near the recycling dumpsters. Every bag and every compost cart received a final sort before weighing and disposal.

Bags of waxed cups were set aside for WWRA, while standard recyclables (cardboard, gallon jugs, plastic cups, paper) were put into the recycling dumpsters. Compost carts were set out along Ann Street for pickup by the City.

The combination of new signage (and elevation to eye level) and splitting the recycling stream into cups and non-cups appeared to improve bin quality over last year. But we can improve their visibility further (see Challenges below).

While our Green Team volunteers were fewer in number than last year, they pitched right in and worked hard, and someone in the beer area took over policing the bins there when we encountered the same trouble with mixed waste as last year. So the street stations were in fairly good order at takedown, due to regular monitoring and real-time sorting.

As busy as the finish line crew and the beer & food prep crew were, they fully supported the zero waste effort and did their best to keep things in order. Some additional training would be helpful here, however.

We had some initial trouble with contamination at the street stations, as the signs were only visible from one side and runners were tossing things into them from all directions. When we added some signs visible from front and back, compliance improved.

Like last year, we suffered from a shortage of volunteers, which was felt particularly when the aid station bags arrived. The finish line director (Michael) and other race staff pitched in to help, but final sort took much longer than last year.

Aid station bag quality was lower than expected. Some were well sorted, but others had food waste, plastic bags, and gel packets mixed in with the cups. It all had to be removed by hand. Jeff (HPR) took home a few particularly messy bags and sorted them post-event. Jeff and Michael also spent considerable time at WWRA pulling out gel wrappers and other contaminants we missed during initial sort.

An unsorted aid station bag that was sorted the day after the event.

Additional training for the aid station staff would help reduce contamination, and time and effort in final sorting. It might also help to label the bags to identify which aid stations were most compliant and which had poor quality bags.

Create a special volunteer category for afternoon final sort. Perhaps they can receive a larger incentive than standard volunteers, as it’s an unglamorous and often messy job.

More up-front training of the finish line and food prep crews would help set expectations and answer questions. On race day they are too busy and preoccupied to absorb detailed instructions.

Brainstorm some ideas on how to reduce the number of plastic bags we have to send to landfill. Perhaps use compostable bags for everything?