After we wrapped up the waste collection at the Canton Liberty Run, I brought the tiny bag of landfill waste to show the RF Events staff. It was less than one percent of the total waste we collected. They were impressed as usual – except for one who seemed a bit disappointed. “It isn’t a baggie,” he said.

A similar event the week before DID result in all the trash fitting into a sandwich baggie. Now they want that kind of result every time. Tough group! Read about both events below.

Results
A repeat of last year – over 99 percent diversion at both events!

The landfill waste at Flirt was tape and miscellaneous scraps of stuff. Like last year, it all fit into a sandwich baggie!

At Liberty, there was also tape, but the biggest contributor to landfill was a used diaper. So we didn’t attempt smushing into a baggie. Still, it was a very small bag.

Flirt with Dirt was at Maybury State Park this year instead of Lakeshore Park, but was its usual “quick and dirty” run on a very nice trail system. And it was cupless this year for the first time.

The Liberty Run is part of the weekend-long Canton Liberty Fest at Heritage Park, which includes carnival rides, games, food, and fireworks. And a pancake breakfast and beer tent (neither affiliated with the race) are available nearby.

The Flirt and Liberty plans were similar, as they are short races and have a relatively small footprint.

At Flirt we set up three Zero Hero tents in the finish area and a set of bins at Ground Zero, positioned next to the parking lot with a clear view of the entire finish area. We also replaced a park trash can near an information sign with recycling and compost bins.

At Liberty, we also set up three tents in the finish area and a set of bins at Ground Zero. Later we stationed bins for recycling and compost across the road, where runners traditionally like to leave water bottles.

We set up the tents for compost, recycling, and wrappers, with 5-gallon pails for landfill trash in front of the tents. The finish line saved plastic wrap separately. Aid stations used bins for cups, and pails for other waste.

Post-race food was similar in both races: bananas, cookies, and snack bags. For both races HPR took the compostable waste to Tuthill Farms afterward.

For Flirt, we were given permission to use Maybury’s recycling dumpster, which we filled with cardboard. For Liberty, we left the collected cardboard and water jugs for the park staff to pick up, per their direction. For both races, HPR took the remaining recyclables to Western Washtenaw Recycling Authority afterward.

At Flirt with Dirt, we again had a sizable team! Every tent was kept sorted, and takedown was quick. At Liberty it was Jeff and staff member Robin for most of the event, but we got some extra volunteer help at takedown which was very welcome.

Both races had very clean waste streams, with not much outside waste and minimal special items – disposable gloves, straws, small plastics, etc.

There was virtually no litter at Flirt (as usual), and at Liberty the number of abandoned water bottles was down significantly. The aid station bags required only minimal sorting.

As a real bonus, at both races we witnessed parents teaching kids about the Zero Waste effort, and helping them recycle and compost correctly! 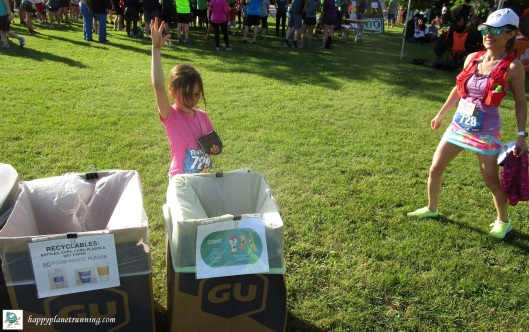 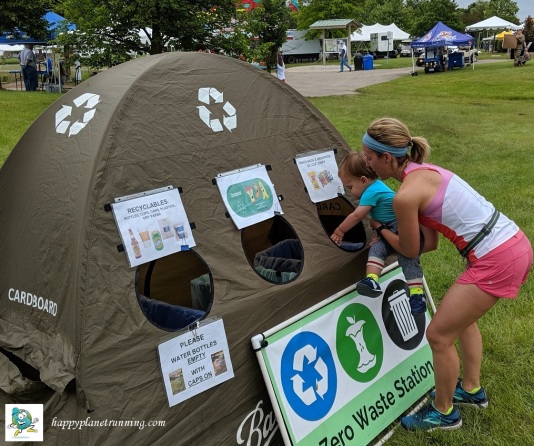 Very little to report here! Both races went smoothly, and the Zero Waste effort was complete within a reasonable time after takedown. One small glitch was printed race bib number pages with excessive tape to remove. On the other hand, printed race results have been replaced with real-time electronic lookup, so things are definitely improving.

Another small item: the Tim Horton’s coffee boxes for volunteers come with a lot of sweetener packets, tiny creamer pods, and plastic stirrers, most of which aren’t used and need special handling to dispose of (packets to compost, creamer pods open-empty-rinse-recycle, put stirrers into the TerraCycle Party Supplies Zero Waste Box).

Perhaps we can use less tape for posting bib number lookup pages.

A permanent coffee supplies box with compostable stirrers or metal spoons would mean less waste. Perhaps someone could even bring coffee in a reusable dispenser, or make it in a drip coffee maker onsite?

We may want to think about prohibiting diapers and bags of dog dropping in our containers. Another race company is doing this so the volunteers don’t have to handle it. They can be put in standard trash cans or specialty receptacles at the event site.