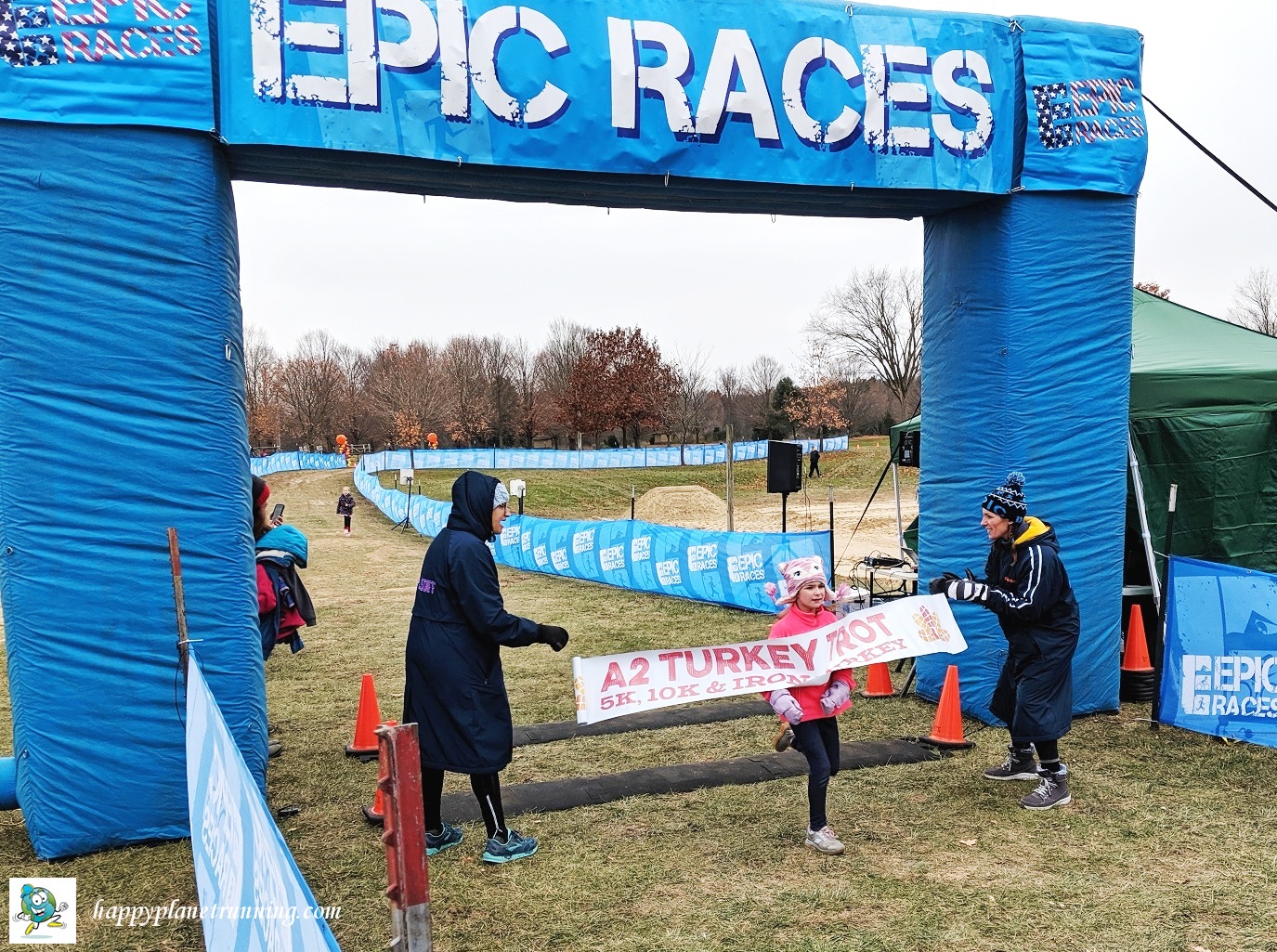 It’s turkey time again, and runners are getting an early start on burning off the calories. Hundreds of runners and their families showed up on a chilly morning to run a 5K or 10K, (or even both) and enjoy some pumpkin spice pancakes. And this year’s event was “greener” than ever, with a reduction in overall waste generated and a shift toward more compostable materials. See the details below!

Recycling volume dropped significantly due to using compostable water cups instead of waxed cups, and there were no pie plates this year. Also in 2018 we donated nearly fifty pounds of leftover pumpkin pies, which counted toward the recycling total that year.

The A2 Turkey Trot takes place at Hudson Mills Metropark near Dexter, MI. The races take place mainly on a paved path which is mostly flat but has some deceptively breath-stealing slow climbs. Runners have the option of a 5K or 10K, with an “Iron Turkey” shirt and medal for those brave enough to run both. There is also a one-mile kids run. 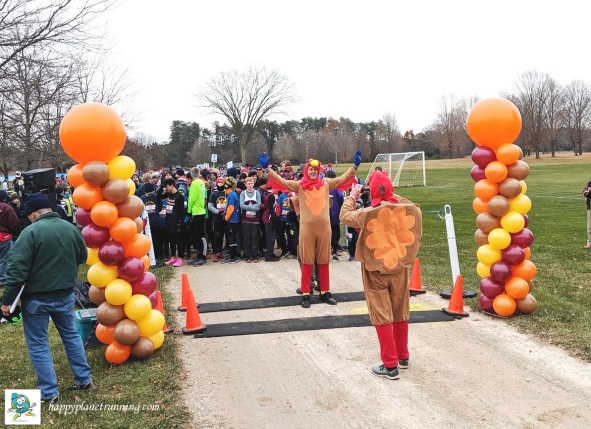 Epic-provided post-race food was pumpkin spice pancakes with whipped cream, apples, bags of chips, cookies, Twizzlers, and hot cocoa. As usual, Ray’s Red Hots provided hot dogs and a Bearclaw Coffee truck offered hot drinks and pastries. As it was a chilly morning, some bonfires were set up near the food tent.

Due to the cold weather we used sets of cardboard bins (Compost / Recycle / Landfill) outside instead of Zero Hero tents. We set up one station near the Ray’s Red Hots cart, one outside the food tent near the bonfires, and one just outside the building’s exit to the parking lot.

Inside the park building, which had registration, awards, and vendors, we set up the Ground Zero table and two waste stations at either end of the main room. We moved or covered the trash bins inside the building, and outside ones near the building. 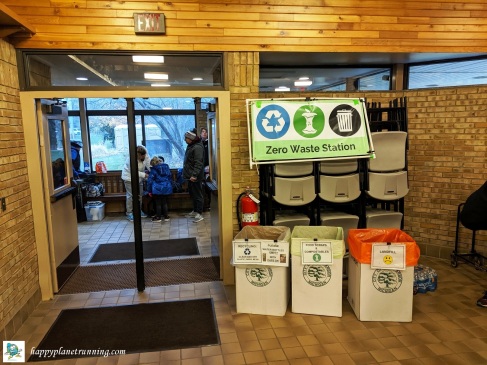 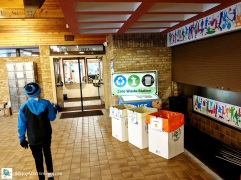 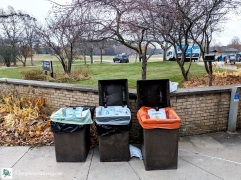 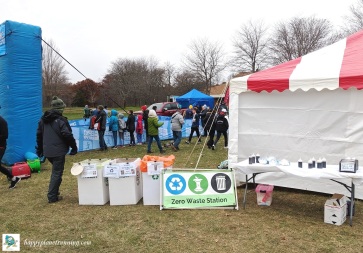 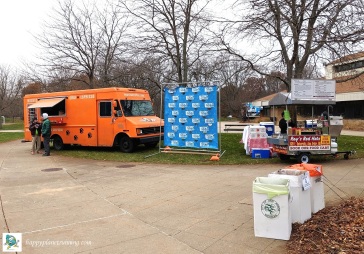 Compostables: Cups, plates, forks, napkins, food waste. Taken to Tuthill Farms after the race. Leftover pancakes were shared with another group and then given to someone with chickens.

The collected recyclables went to the Western Washtenaw Recycling dropoff at nearby Dexter Township Hall, and compostables to Tuthill Farms. Leftover pancakes were shared with another group and then given to someone with chickens.

Waste collection went smoothly, with only a small amount of cross-contamination that was easily sorted.

The two volunteers were terrific, regularly making the rounds of the waste stations to keep them sorted, and making quick work of takedown, data collection, and loading the trailer with recycling and equipment. Thanks, Megan and Lexie! 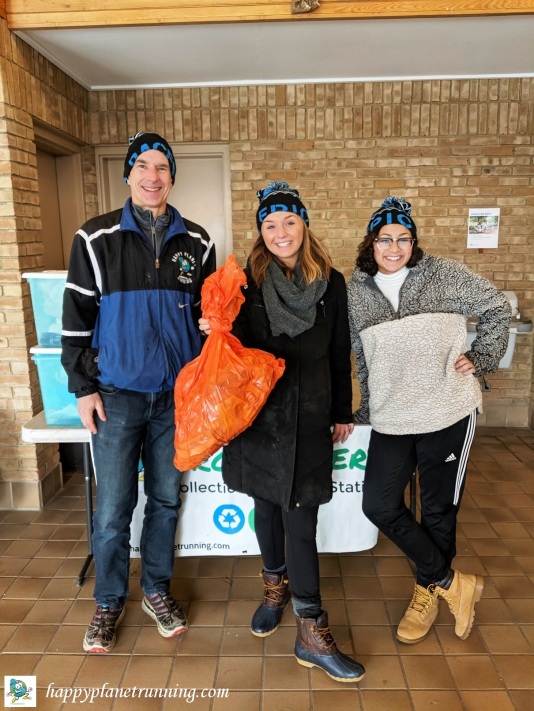 There was some amount of litter in the race area. It was picked up by the race staff, but it meant extra processing just as we were wrapping everything up and loading the trailer.

The Green Team can sweep the race area before takedown to reduce the amount of last-minute waste processing and extra work for the race staff. It should be a standard part of the Zero Waste plan.