The final RF Events race of each year is the Holiday Hustle, and over 2,000 runners braved the cold and came out to run a mile or the 5K. And, of course, we couldn’t lower our Zero Waste standards just because it’s a little cold and dark (okay, really dark). Could we improve on 2018’s landfill total of just five pounds? See below!

Main contributors to landfill trash were soiled plastic bags, gum, a few wrappers, a tube of toothpaste(?), and (naturally) a bag of dog poop.

The main event is a 5K running through Dexter. Holiday costumes are prevalent, and the race swag includes lighted necklaces and holiday beanies. For kids, there’s a one-mile race before the 5K, and hot chocolate and cookies afterward, and Santa puts in an appearance at the pavilion.

The 5K starts at 4:30 p.m. so it is fully dark at race end, which makes it a challenge to keep the waste sorted (and for runners to see the signs on the bins).

We set up a pavilion near the finish line and awards table, with Ground Zero and waste stations (Compost / Recycle / Landfill bins) on three sides. We put pails on the table for TerraCycle items and plastic wrap from lighted necklaces and wrappers from candy canes (provided by Santa). Satellite stations were set up near the registration tent and at the other end of the park near the memorial statue. 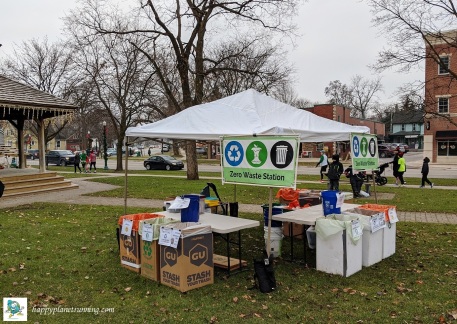 Cookies and pretzels were handed out in compostable bags at the finish line, along with water bottles. No small candies or snack bars were provided this year, which helped cut down on total waste and especially the small stuff that’s hard to sort out in the dark.

We forgot to put a bag at the finish line for plastic bags, so there was a bit of a pileup, but we collected it all quickly once we were made aware of it.

All collected waste went into a U-Haul trailer. Due to it being dark and cold, HPR did the weighing and final sort the next day. Compostables went to WeCare in Ann Arbor, and recyclables to Western Washtenaw Recycling and Recycle Ann Arbor. TerraCycle materials went into their respective Zero Waste Boxes.

The central multi-station pavilion worked very well, like the other events this year where we’ve used it. And we had a large enough team to keep the central pod staffed while others patrolled the other stations.

I had a team of six, which helped greatly in keeping the bins sorted and in a timely takedown in the dark and cold. The Zero Waste Volunteers of the Year award went to Dana Furnas and her daughter Layla for their “above and beyond” work at several events this year, including extra sorting the day after those events.

The cardboard boxes that held the beanies were wrapped with tape and plastic strapping. This had to be peeled off after the event. The strapping went into the TerraCycle Zero Waste Box for plastic packaging.

We covered the park trash bins with contractor bags, but some people still decided to put trash in the one near Santa’s pavilion (on top of the bag). It wasn’t a whole lot, so I’m not sure if that location warrants another station or not. 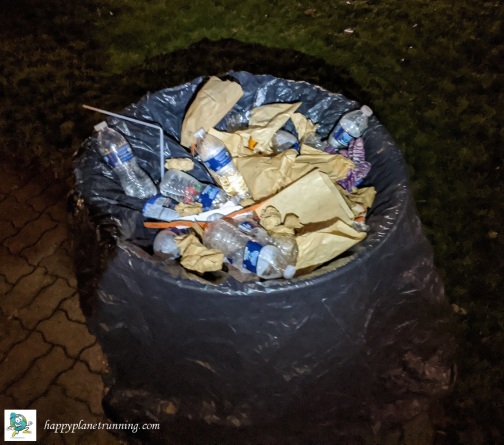 Consider going to smaller water bottles next year, or to cups and water jugs. Absopure is a sponsor and may require our use of the full sized bottles, but perhaps something else can be arranged.