Hell is a wetter place than I’d imagined. At least this year’s Dances with Dirt in Hell, Michigan, was wet. The races (50K, 50-mile, and relay) began on time, into a steady rain that lasted until after 10 a.m. The skies cleared in the afternoon and it warmed up, but the post-race area remained saturated, even flooded in places. Still, as the whole point of this race is to get dirty and wet on the trails, it was a success, both for the runners and the Green Team. Read on for details!

Key changes from 2019 included finish food of hot dogs instead of pizza, and a fenced off beer area stocked by Arbor Brewing Company. Due to expected lower attendance and lower waste, we did not rent a recycling dumpster.

We used the standard single main Zero Waste station, which was set up in the parking lot next to the Mean Weenie hot dog truck. They used compostable boats, producing only single-use condiment packs as landfill. The hot dogs were excellent and very popular. (They get the Green Team’s vote to come back.) We monitored “all waste” bins in the pavilion, which included a small ultra aid station, and deposit, compost, and recycling bins in the beer area.

Total weight of deposit cans and bottles was 102 lbs., only slightly less than the 117 lbs. in 2019. So the large reduction in overall recycling was in other categories such as plastic bottles and waxed cups, and fewer shoes. Compost was also down due to no pizza boxes and very little food waste, as opposed to large amounts of uneaten pizza in years past.

One challenge at DWD Hell has been the large amount of waste from aid stations and exiting runners just before dark, resulting in hours of extra sorting the next day. This year aid station waste was much reduced and dropped off earlier, and most cans were put in the beer area bins. So Sunday morning was spent mainly packing up, dropping off recycling, and policing the parking lot. And no crawling through a recycling dumpster pulling out trash and shoes!

Shoe collection this year was 45 pairs, down from 82 in 2019. They will go either to Soles 4 Souls for reuse, or Nike Grind for recycling, There was also much less discarded clothing. Not sure why. A check of the park’s dumpster showed just one pair of shoes and no obvious clothing.

We had a great afternoon volunteer team. Thanks again to Webb, Bridget, and Sue, who tackled all the waste bags quickly and efficiently. And the bins in the beer area were monitored by a volunteer there, for which the Green Team was very grateful.

In all, a great success for the Zero Waste team, with a diversion rate of nearly 99 percent! 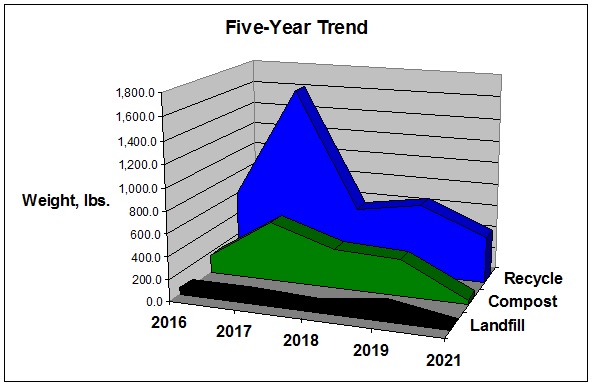