The Original Ann Arbor Turkey Trot takes place at Hudson Mills Metropark, on a paved path with some challenging slow climbs. Runners can choose the 5K, 10K, or the “Iron Turkey” option for those brave enough to run both. There is also a one-mile kids run and a 200-yard dash for the youngest runners.

The post-race area had a smaller “footprint” than previous years. We set up food, awards, and the Zero Waste Station on the concrete patio near the park building rather than out on the grass. It was a good choice on a cold morning with rain expected.

In previous years we have replaced park trash cans in the race area and building exits with our own bins. But the park had set out so many trash cans and recycling containers that I changed the plan. I moved those in the finish and food area but left the ones at the starting line and the exits to the parking lot in place, periodically policing them to remove race waste. This saved time and effort, and we helped out the park by sorting out non-recyclables from their recycling bins.

We had a Green Team of five volunteers, all of whom worked hard and cheerfully. With their help we stayed on top of sorting, policed the area, and got everything taken down and packed up by their shift end at 12:30. 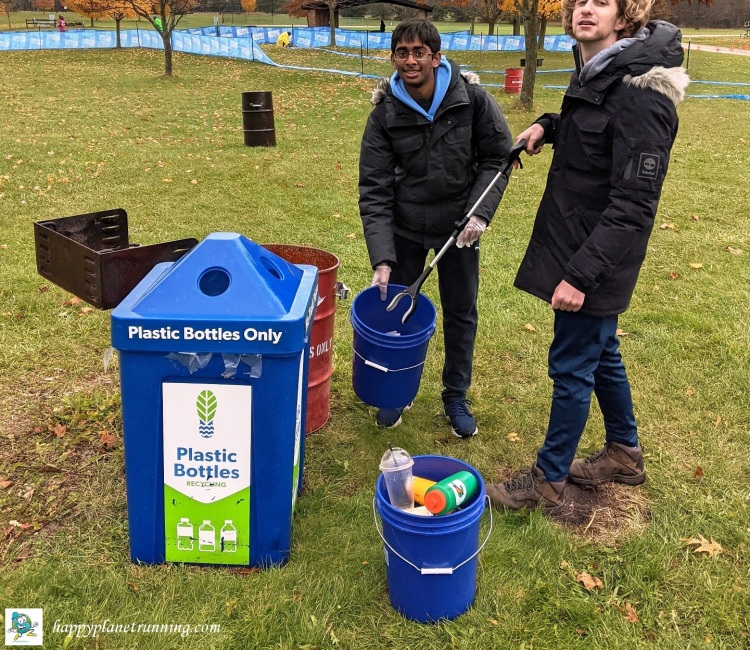 The food tent served hot mac & cheese, and pumpkin pancakes, with compostable plates and forks The Bearclaw Coffee truck also used all-compostable cups. The single hiccup was the use of waxed cups for the hot cocoa, which required rinsing to make them recyclable. Simple fix for next time.

Total waste was roughly in line with 2019 and maintaining a drop of more than 50 percent from 2017 and 2018. One contributor was providing hats instead of shirts, and switching to pancakes (made as needed) instead of pumpkin pies (large fixed purchase, with leftovers).

As with the Ann Arbor Marathon, mac & cheese pouches made up the majority of the landfill. I judged their cleaning to be too troublesome to be worth the effort. And we ended with less than five pounds of landfill anyway. A great finish to another great sustainable year at Epic Races! 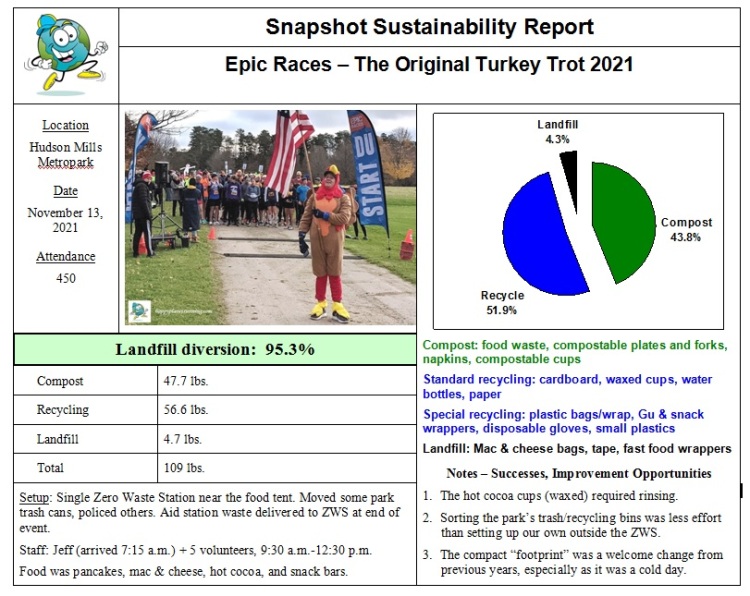 By day, I'm a mild-mannered Director of Training at a software company in Ann Arbor, MI. By night - I sleep, mostly. In between, I do other things I feel the need to write about. Check out fitnessat50.net to view my thoughts on running, cycling, Aikido, and other things that keep me going. View more posts