Hightail to Ale: Zero Waste in the Rain 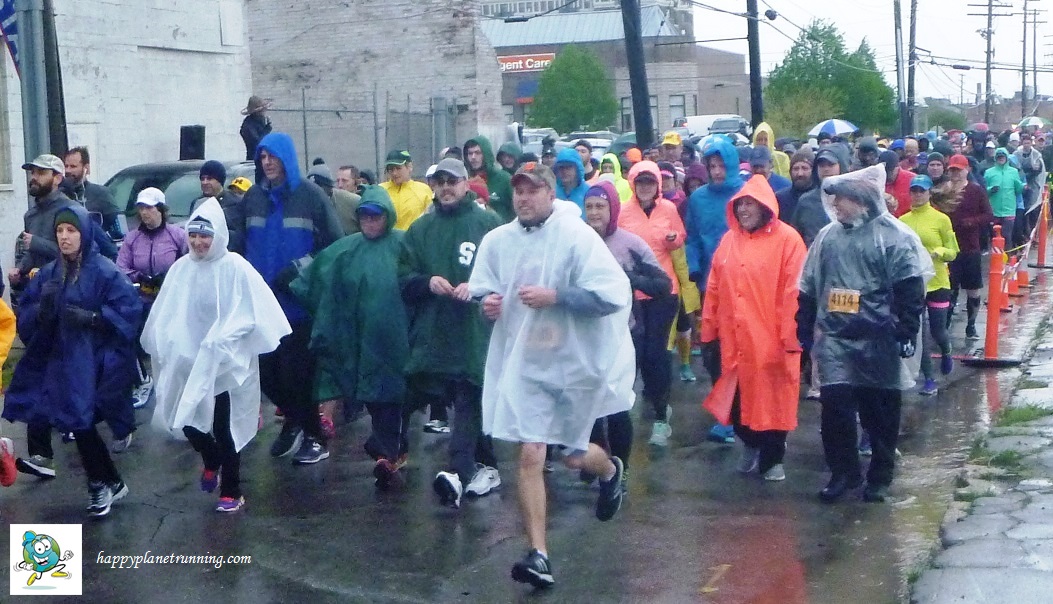 Hightail to Ale is one of the “Thirsty 3” series that celebrates great beer, wine, and cider in southern Michigan. It takes place on the streets near the Atwater Brewery in Detroit, bringing several thousand runners out for a Friday night beer party with a 5K thrown in.

Waste comes mainly from the post-race party, where free beer is distributed to runners, and food trucks serve up barbecue and other local fare.

Last year the post-race waste hit us hard and fast, from the food trucks, water bottles, and thousands of cans of beer given free to finishers and sold to spectators. There was no time to weigh it, and the recovered cans disappeared from the recycle dumpsters the next day. We were determined to do better this year, despite the forecast for chilly temps and constant rain. How did we make out?

As forecast, it rained during the entire event. We expected less waste, so we deployed just four tents; two in the food truck area entrance/exit, and two in the post-race beer area. A recycle bin was placed at the “No Alcohol Past This Point” sign between the finish line and food area. Later, two more bins were put inside the brewery where the post-race party had moved.

A local youth basketball team supplied several volunteers. In return, they received as many empty beer cans as they wanted. To help them, the two tents in the beer area were reserved for beer cans only. The volunteers had additional bags to take non-can waste.

The recycle dumpster was placed in a fenced area between the food trucks and the beer area. This had two advantages; it was centrally located and would not be used by passersby as it had been in 2016.

Compostables were collected in our 96-gallon bins for Tuesday pickup by My Green Michigan. Bags of plastic bags/wrap from water bottle cases, etc. were taken by Happy Planet Running for Recycle Ann Arbor.

Due to time constraints (dark around 9 p.m.) and crowd size, some economies were made. We would not weigh the bags of beer cans, instead estimating weight based on the cans sold and given away. TerraCycle materials, such as Gu wrappers and pretzel bags, were treated as trash.

Attendance was down from last year (2,900 runners vs. over 4,000 in 2016) but the Zero Waste logistics were the same: not much to do until finishers came in, then work like crazy until everyone left.

We successfully handled the cardboard, compostables, and lots of cans. But some unsorted bags of recyclables had to be put in the brewery’s dumpsters. There was no time to sort them and it was the most practical way to avoid contaminating the recycle bin.

Unexpected things occurred with the food trucks, location of other waste containers, and tent staffing (see below) that affected our ability to control and weigh all the waste. Therefore, some of the results are based on best estimates rather than hard numbers.

Can weight estimated as follows: 12 empty cans = 0.7 lbs. The brewery told me they’d put out 5,000 cans, and I expect they gave out around 3,000. Some were not recovered, some went into the recycle bin, and the basketball team took about 2,000.

The four tents were sufficient and were placed in good locations. However, one or two more staffed tents by the brewery’s dumpsters (see below) might have improved our recovery of recyclables.

The food trucks gave out compostable materials with their food, greatly helping with recovery and sorting. (See one minor slip below.)

The 30-yard recycling rolloff was the right size for this event. We filled it to about 75 percent. Compostables fit into one 96-gallon bin.

The volunteers were troopers, manning the tents through hours of rain. I put the basketball team on the beer tents and the inside bins, with their focus on collecting as many cans as possible. They reported clearing about $200.00 from them.

There was just one small slip up with the food trucks; Slows Bar BQ provided sauce in plastic cups instead of something compostable. These had to be sorted out from the food waste.

While our recycle bin was secure, several 4-yard dumpsters had been placed along the street opposite the food and beer areas. People used them for all types of waste, which hurt our recovery of recyclables. There was also a container for used cooking oil that people threw cups and cans into. I cleaned it out at the end of the event.

The bin by the “No Alcohol Past This Point” was unstaffed and contained mixed material. I was able to sort the first full bag from there, but not the final one. The food area tents were unattended part of the time, resulting in some extra sorting, but not too much.

The brewery initially set up their sales tent outside. Due to the rain, they moved it inside the brewery. This meant that many cans and cups were disposed of using the brewery’s waste cans, despite having a couple of our own in there. Also, the 96-gallon bin I gave them for empty beer cases got filled with all kinds of waste, and there was no time to sort it, so it had to become trash.

We need a better way to control the waste streams during the post-race rush. Also, we will need to communicate our needs better with the brewery, so we capture more of the recoverable waste.