A perfect fall morning, a run through an apple orchard, pancakes, and the best draft hard cider on the planet. That’s as good as it gets, folks. And this year, over 2,000 people showed up at Almar Orchards in Flushing to run, eat, and imbibe.

The Scrumpy Skedaddle is a great race, but last year it posed some real challenges to the Zero Waste team. A lot of people were served in a short time, the waste materials needed heavy sorting, we were short on volunteers, and we had to pull hundreds of individual butter packets out of the food waste and recycle bins, trying not to piss off carb-loading yellow jackets buzzing everywhere.

Could things go more smoothly this time? Read on!

The Scrumpy Skedaddle is the final event of the “Thirsty 3” series, which includes Hightail to Ale and Running Between the Vines. It takes place in the fall at a working apple orchard and cider mill, with pancakes and hard cider on draft for the runners after their race. It’s easy to see why it’s popular. 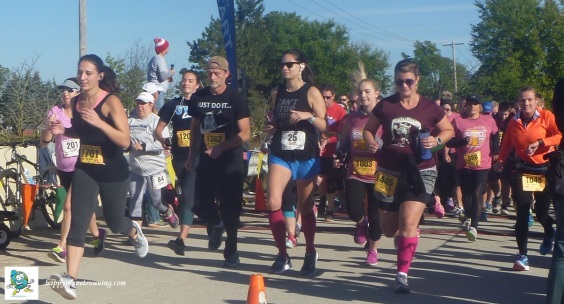 Runners can choose a 5K, 10K, or both (the “Cider Slam”). Both courses run through the orchard, providing mildly challenging footing and sometimes narrow paths between rows of apple trees. It’s so much fun that the Zero Waste team captain felt the need to “police” the 5K course as part of his job. (Have to check on the aid station, you know.)

The Zero Waste team is busiest during the breakfast rush, when we’re trying to serve pancakes and cider to over 2,000 runners, with everything wrapped up by 1:00 p.m. It’s in everyone’s best interest to streamline the food serving and waste disposal processes as much as possible.

Last year we had tents set up at the start line, finish line, one at each end of the line of porta-potties, four out back in the pancake area, and one along the road leading back to the front..

This year we did not set up tents at the start and finish areas. Instead the Zero Waste team “swept” the area at the start of each race and collected water bottles and other waste. The tents in the porta-potty area were replaced with single bins, as most of the waste was paper towels from the portable sinks. A few water bottles and other recyclables were tossed in, but they were easily sorted out.

After race start, the tent at registration was moved to the path which led to the pancake area. Recycling bins were added at two other points along this path. In the pancake area four tents were set up, with two put in the main eating area and two flanking the exit.

The “Ground Zero” sorting station was placed near the music stage, away from the eating area but close enough to quickly service the tents. It was also reasonably close to the recycling rolloff.

We ordered a 20-yard recycling rolloff from Waste Management. As they could provide a tonnage report, we did not weigh the recyclables before tossing them in. We planned to have minimal actual trash.

We had four 96-gallon bins for compost collection – plates and utensils – and set out buckets in front of the tents for food waste to feed to the orchard’s pigs. My Green Michigan picked up the collected compostables.

Chris Cakes ran the pancake breakfast. As with last year, we agreed ahead of time that RF Events would supply compostable plates, forks, and the cups (cider mugs).

There was some discussion over butter. The individual plastic/foil packets caused a major headache last year, as people threw them in the compost bins with the plates, requiring the team to fish them out while yellow jackets buzzed everywhere. After discussing alternatives, the RF Events staff decided that “no butter” was the best solution.

Jeff (Zero Waste Captain) set up tents the day before. On race day, two starting line volunteers assisted with placing the tents and bins. In the pancake area there were enough volunteers to staff every tent, leaving Jeff free to patrol the other tents and keep them sorted, and to change out full bags.

Of the compostables, about 50 lbs. was food waste given to the orchard’s pigs, with the remainder being plates, forks, and some food waste not recovered for the pigs.

The waste disposal process went very smoothly this year. The improvement was due to several factors: the change from recyclable forks to compostable ones, elimination of the single-use butter packets, improved tent signage, and full-time tent staffing during the breakfast rush. And the race organizer (Mandy) plugged the Zero Waste program several times over the mike, reminding everyone to put things in their proper place.

As a result, final sorting was much reduced, with no need to compete with the yellow jackets by digging trash out of the compost bags.

Being able to set up the tents inside the day before was a big help, as they didn’t have to be assembled on race morning, and didn’t get soaked with overnight dew. During setup on Friday a tent pole snapped, but there was time to get a replacement for it.

Nobody complained about the lack of butter.

The aid station crew did a good job, as little additional sorting was needed. There were just a few Gu packets to sort out of the bags of cups.

Due to a miscommunication, Jeff “policed” the 5K course without knowing that the Zero Waste volunteers for the pancake area had already arrived. Oops. However, it was early in the breakfast rush and everything was in order, with two tents already staffed and operating well.

We were surprised (not told about) an additional vendor serving hot dogs, using paper boats that were not compostable. Fortunately not too many of those wound up in our waste stream.

The bins at the porta-potty sinks should probably be the first things set up on Friday, as they were already in use and some people had dropped paper towels on the ground.

Better communication regarding volunteer shift times and vendors other than the orchard store and the pancakes.

Set up at least a couple of bins near the porta-potties before race day.

And here’s a bonus picture just because it’s so awesome!